“‘Let Me Breathe’ is about facing the music, and acknowledging, as Aleksandr Solzhenitsyn so beautifully puts “…the line that separates good and evil right through every human heart.” – SMALL TOWN TITANS 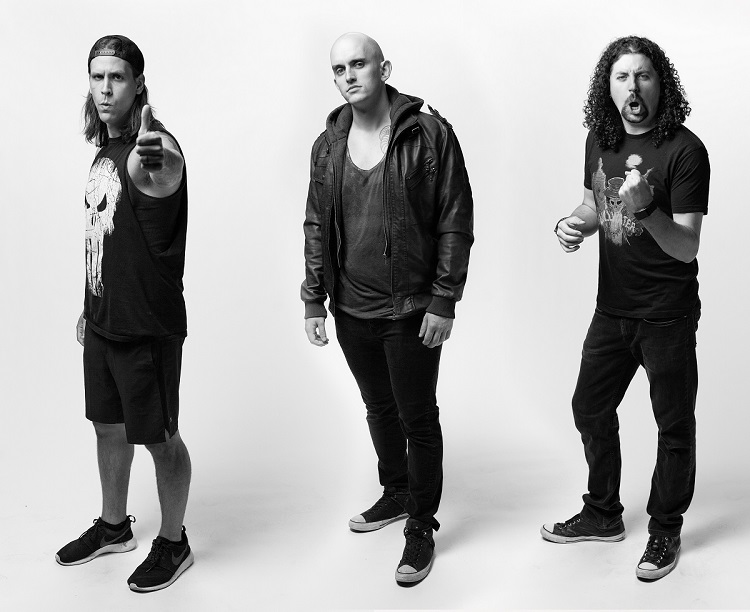 The Small Town Titans are an American rock n’ roll power trio from York, Pennsylvania, who love to constantly create, as well as play live. Gone is the notion that a rock band should only release 10 songs at a time every 2 years. In a world where music fans crave new content constantly, the Small Town Titans aim to deliver their brand of art all of the time, drawing inspiration from rock legends such as the Foo Fighters, Audioslave, and Deep Purple. Thanks to their efforts at taking matters into their own hands, STT can create and release songs, podcasts, live online concerts, and more with no rules. In a social media driven world, STT knows releasing quality, constant content for their fans is as important as playing great live shows.

The band was formed on May 4, 2011 at Lebanon Valley College, where Phil, Ben, and Jonny all met, and had finally decided to jam together towards the end of Phil’s senior year . Phil and Jonny had been close friends for years prior to the band’s first jam session, with Ben and Jonny also having known each other and staying in touch throughout school since freshman year. After playing together, it didn’t take long for the group to decide to start playing shows live locally. The name “Small Town Titans” had been in Phil’s back pocket for years, and he had finally found the band that fit the name. It didn’t take long for the group to grow a very loyal local fanbase, as they continued to hone their live performance chops, playing clubs on weekends and mixing their original material with covers of classic and modern rock songs. Soon after, the band began to take their career more seriously. They decided to hit the road full time, and began to release more material, and plenty of music videos.

In November of 2018, the band’s cover of the Christmas song “You’re a Mean One, Mr. Grinch” went viral in a matter of days, leading to charting on various Billboard charts including Holiday Digital Song Sales, Rock Digital Song Sales, Emerging Artists, and reaching #5 on the Next Big Sound chart. The song also reached #2 on the iTunes Rock charts, only being surpassed by Queen’s “Bohemian Rhapsody”. STT quickly found themselves achieving success, all on their own terms. That success continues into this decade with songs such as “The Man”, “Universal Limits” and “Rufflin’ Feathers” all landing on playlists such as Spotify’s Hard Rock, New Metal Tracks, and Hot Road Trip, Apple Music’s New in Rock, and YouTube Music’s Maximum Decibels.

As a newly signed act to AntiFragile Music, the band is releasing their first album with a record label, The Ride,. Under the tutelage of label owner and music industry veteran Tom Sarig (Nine Inch Nails, Blink-182, Sammy Hagar), the new album shows STT pushing into more musical directions than ever before, from the Queen inspired “Behind The Moon”, to the angsty and aggressive “When It All Comes Down”. “Rufflin’ Feathers” delivers a tongue-in-cheek message about today’s social media circus, while “9 To 5”, the album’s ballad, has more country crossover appeal than anything else in their catalog. “Sex and Candy”, a Marcy Playground cover, brings the blues, while “The Ride” title track showcases plenty of musicality, and an evolution to the band’s sound. There are plenty of big, loud hooks throughout, all the while without losing the edge of a rock n’ roll band who sounds just as good live as they do on their recordings.

With the help of AntiFragile Music, Small Town Titans have managed to find continued success by simply never forgetting one thing, their fans, both new and old. After asking their fans to vote on their fanbase name, they decided on calling themselves the Titan Army. As the Titan Army grows, so does the band right along with them. With a love for playing live, a Small Town Titans show has evolved into more than a concert. It’s an event, with plenty of stage banter in between songs, and no two shows ever being the same. The band simply hits the stage to deliver an energy driven show using guitars, drums, and their voices. Nothing more, nothing less. This approach to their live performances has led to them sharing the stage with acts such as Highly Suspect, Papa Roach, Black Stone Cherry, Pop Evil, and more. For all things STT, visit smalltowntitans.com.

Previous 2 SHADOWS Teams with THE VEER UNION on “Scratching at the Surface;” Out NOW Via ROCK SHOP RECORDS!
Next Dinosaurs, Skateboards and Rebellion in WAVEBOMB’s New Alt Rock Music Video