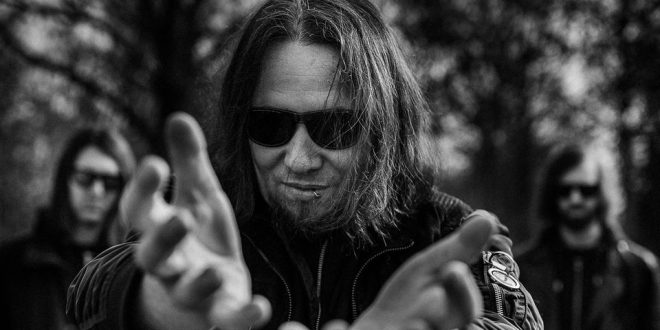 GumoManiacs continue to leave an imprint with their brand of German thrash metal, as well as their equally notable fan-friendly approach. The Regensburg, Bavaria-based band have assumed a three-piece lineup, led by singer-guitarist Daniel “Gumo” Reiss, and rounded out by brothers Robert “Hubi” and Michael “Air” Hofmann (bass and drums, respectively). As a trio, they have completed their new album, Morbid Tales of Terror, against numerous odds, and have persevered thanks to the dedication of their fanbase. While the album will be officially released November 22nd, most fans opted for an immediate digital download with their pre-orders, and have since praised the album as nothing short of a masterpiece.

I caught up with Gumo to discuss the new album, looking back on his formative years, and what the impact of consistent fan support has provided for the band overall.

How’s everything with the band these days?

It’s going well, and we’re very satisfied with our results. On the other side, I’m a sound engineer, and we’ve had problems as a result of the lockdown which caused me some anxiety, but other than that, it’s been great, actually.

Back in 2007, you started GumoManiacs, and I understand that it was initially conceived as a solo project. What inspired you to move toward the band approach?

At that time, it didn’t feel complete. I found that I needed to collaborate with other people, so I had the vision of starting a band. Whether you’re recording in the studio or performing on stage together, there’s a different energy to that. Since we’ve shared this energy together, all of us have had a strong connection to our music, and that’s what was missing before.

Taking it back a bit, when you were growing up, what parts of your musical environment had an impact on you?

As a teenager, it was mostly what my sister listened to when we were at home. She’s five years older than me, and liked a lot of music from Dio, The Scorpions, and AC/DC, which was cool and had influenced me a bit. It was weird, too, because I grew up as the whole alternative rock movement was happening, with bands like Nirvana, Soundgarden, and Faith No More. My classmates listened to that, but maybe there was something inside of me that wanted to be different. I started listening to thrash metal instead, which was either on the decline, or was dead already. But when I heard Sodom’s Agent Orange album for the first time, it had such a magical effect on me. It made me a music fan, and the musician I am today.

From a lyrical perspective, you’re drawn to themes of horror and fantasy. Does the music come as a result of these lyrics, or is it sometimes the other way around?

Both happen, actually. Sometimes I write a riff, and it influences a certain lyrical atmosphere, like, “That sounds like a ritual,” or something. Other times, the lyrics come first. I read a lot, and depending on what I write, I’ll let that influence my guitar playing. I would say it’s about 50/50.

Now, you have your new album, Morbid Tales of Terror. As I understand, the album almost didn’t see the light of day, but was possible with the help of your fans. Can you tell me a bit about the importance of fans, and how their support made the album possible?

With the support of our amazing community, it means the world to me. The Coronavirus situation is still happening worldwide, and as a sound engineer and musician, those are really bad professions to have right now. I was really struggling, and some things in my personal life were also not going so great, so making this album was some kind of savior for my mental health. But like you had said, the album almost didn’t happen. With Coronavirus, we couldn’t travel since there were very few planes in the air, so we were stuck, and we were uncertain.

Then, I did something that I wasn’t used to doing; I asked for help. I totally underestimated how many people are into our stuff, and wanted to see this new album happen as well, but from there, the connection within the community rose to another level. Having them on my side, and in my life, they really do mean the world to me; I don’t mean to be cliché. I’m totally aware that, with their help, it was possible to make this album. I keep telling them that this is something I’ll never, ever forget. In fact, many of them are now a part of the album forever because those who donated have their names in the booklet. That’s a really meaningful addition, and I’m super grateful every day for everyone.

Right off the bat, I appreciate the diversity of tempos and styles on the album. What went through your mind when coming up with the track sequence?

As far as I recall, we had a plan for the last album, By Endurance We Conquer: Demons and Damnation, to include only fast songs. For this album, I didn’t really have a plan; I just started writing. I decided that each song should have its own identity and not seem repetitive. They all stand on their own, which is not something we had intended, but once we started carving them out from stone, we thought that this was the way to go.

Yeah, I can hear the progression in each of your albums. You started with a straight-ahead thrash sound, but by this album, it’s not mainly based on thrash, or even metal anymore. It’s a rock sound this time.

Yup. I think that happened naturally, you know? It’s interesting that you mention hearing a rock sound, because I’m a huge Scorpions fan. Some friends of mine have made fun of me for listening to them, because they’re considered the ballad kings, or too soft. But their early stuff influenced me a lot; it actually has a lot of fast and heavy songs as well. Back then, it was easier to understand what Sodom or Venom were doing, but as I grew as a musician, I started going back to my very early roots, which were Scorpions, Judas Priest, and Iron Maiden, and that sound keeps developing. Actually, I’m quite curious as to what will happen next. Our sound still needs to be thrash metal to be authentic, but the heavy rock sound is always inside of me.

The production for this album is another asset that has improved. I noticed that your bassist, Hubi, produces the music. With your sound engineering experience, do you sometimes take part in that process, or do you leave it to him?

Nope, Hubi is the producer; I write a lot of the music. I think on the last album, 90 to 95 percent of it was written by me. I know how to produce and mix an album, and maybe even master one, since I have the knowledge as a professional sound engineer. But also, I need a certain distance sometimes, and it’s great having Hubi in the band because he can do those things better than me. That makes certain that everything goes right, because if one person takes care of everything, there’s a very narrow perspective to work from. It’s better to open up and hear what other people think, and how they put their stamp on the music.

What do you notice about Hubi’s production style?

It can be difficult because he asks for a lot out of our performances, and it’s hard work to please someone like him, but the results are very good. I like how naturally he mixes things, and how he interprets ideas from an artistic standpoint. For example, if there’s a song about a place that’s really cold, he knows how to make the song represent that feeling, and that’s something he’s really good at. When we get close to the final result, and he shows us those first mixes of our performance, the most fun part is sitting back and listening to them. It’s like we’re being rewarded for our hard work.

Given these new circumstances, how would you say the chemistry is between the three of you?

That’s a very deep question. I would say it just works. There are times when I wish that we were a lot closer as friends, and had more common interests on a personal level. But more than anything, I’m very grateful that these amazing guys are in my band, and put their time, effort, and professionalism into my songs. Sometimes, it’s like this challenging dream of having the perfect band that is also made up of your best friends. The truth is, we all live apart from one another, in different towns, and have many different things going on in our lives. There are also times where we don’t even talk that often. But at the end of the day, we are friends. Maybe not the kind that you’d wake up at 4 AM to talk about something really, really bad that happened, but they’ve helped me a lot in my personal life many times, so I know we can count on each other.

With the success you’ve experienced through this difficult time, what have you learned about yourself?

I’ve learned to trust the power of our community. With coronavirus, there was an existential fear as if my existence as both a musician and sound engineer was being held down. But in the end, that made me recognize that I needed to chase my dream, and to totally go for it. Before, I was mainly focusing on sound engineering since that was making me money, but now I’m focused the most on music. What I’ve learned is that when you’re pursuing a dream, you need to have a plan, trust your abilities, and trust the process. That’s the biggest revelation I’ve had.

I’m grateful I have you in my life, and I’m totally aware that I cannot do this without you. I’ll never forget how we made Morbid Tales of Terror happen together. I hope to put out several more albums before I retire, but this will always be a special one. Thanks for your help, your passion, and your energy. This is probably the coolest thing that has ever happened in my life as a musician.

I come from a family who is passionate about all things music. I learned to sing at an early age, and by 13, had my very own Fender Strat guitar. I tried my hardest at learning all that I could. Because I was born with cerebral palsy, I had to teach myself an adaptive playing style. I learned to write and record my own music, despite these difficulties. In college, I started making great use of my writing abilities by reviewing music, as well as copy editing. I guess it's best to stick with what you know, while welcoming a fair challenge at the same time.
Previous Autralian Inide Act Brian Baker Releases New Single “Let Me Be My Crazy”
Next Loui Bandz presents: Rocking Dior