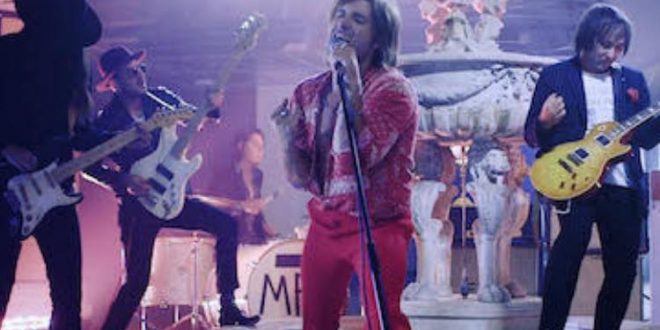 Crushingly heavy but constructed with enough of an attention paid to melodicism that we don’t start sweating as the ascent towards the chorus reaches its fever pitch, Moon Fever’s “Undertaker” could be their most calculated single to see widespread release thus far.

There are so many elements in this song that seem, to me, a bit more progressive in tone than the previous cuts we’ve heard from their recording sessions have been, and although it’s not the first track they’ve produced to have boasted a supersized backend, I don’t think any in their present discography has the decadent finish (cosmetically and compositionally) this one does. Moon Fever are coming out during a time that some of my critical peers have referred to as the ‘postmodern period’ in rock n’ roll history – a dead space between irrelevance and absorption by some of the more raucous developing subgenres in hip-hop – but in the latest of their studio work, they aren’t retreating into the shadows from which so much of their sound has been directly sourced. They’re staring down destiny with almost the same attitude a lot of their forerunners in the genre did, and as a result, sounding more ferocious than a lot of their similarly-hungry peers in and outside of the American underground.

First and foremost, it’s worth noting that the distortion on the guitar parts is applied to the master mix more as an embellishment on the melody rather than as a centerpiece of the entire composition. As much as this might seem like it should be a fundamental in 2020, it definitely isn’t – hence why the fresh construction of this track’s mix is so refreshing to come across as both a critic and a fan of heavy music in general. The lyrics shared with us in “Undertaker” reflect the emotion of the music as opposed to the other way around, and scarcely is there a moment in which the beat sounds like it was designed solely to frame the verses. Everything is independent in this melting pot of metallic might, and yet it contributes to a grander narrative as demonstrated by the animated music video that wouldn’t have been accessible were each intricacy left exactly as it is. It’s hard to make complex music without overthinking your content or yourselves, but in this respect, Moon Fever are kind of putting on a clinic in this release.

I just heard about this band in the past year as they’ve dropped a string of songs to life their faces from obscurity to the headlines of numerous indie zines and blogs this autumn, and I think it’s clear that they’ve got quite the future ahead of them if they decide to stick with the present creative trajectory they’re on at the moment. It’s becoming insanely hard to find quality melodic rock on the FM dial anymore, and while I wouldn’t say that Moon Fever are the most radio-ready band I’ve heard in 2020, they’re absolutely able to take the work seriously enough to win mass-appeal easier than some others would.