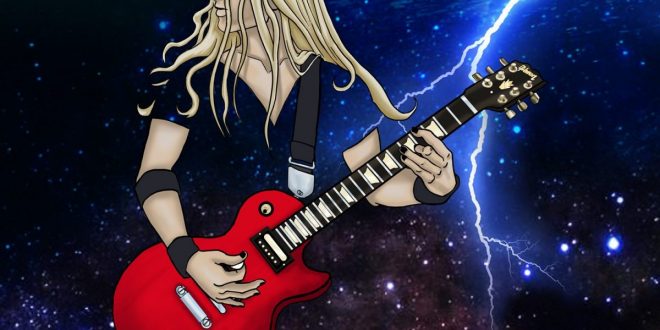 Darren Michael Boyd returns with his second full-length album, the follow-up to his 2019 release, “Lifting The Curse.” Boyd is a 2020 Josie Music Award nominee.

“Wonders of the Invisible World” is a 1693 book recounting the Salem Witch Trials. The author, Cotton Mather, espoused the belief that the prosecutions of the “witches” were to gain God’s blessings over the colony. Fast-forward over three centuries, and another collection of wonders is earning a “Guitar God” his due. This time, it’s Ottawa’s Darren Michael Boyd, that is casting a spell over fans and critics alike.

Following the successful release of his 2019 debut album, Lifting The Curse, which earned the veteran guitarist a Josie Music Award nomination, Boyd is back with his 2nd album, Wonders Of The Invisible World. Recorded and produced by Boyd during the COVID Quarantine, the ten-track album of guitar instrumentals looks to pick up where Boyd’s debut left off.

The video for the first single and title track is available at https://www.youtube.com/watch?v=KjxAnXPHOro

“My objective has always been the same,” says Boyd. “Play loud, be seen, and be heard…and proceed to tear the world a new one!”

ABOUT DARREN MICHAEL BOYD: Darren has toured and recorded with a variety of artists, such as Black Ju-Ju, Creeping Beauty, and Famous Underground (featuring Juno award-winning vocalist Nicholas Walsh). He was invited multiple occasions to privately audition for platinum-selling artist Fefe Dobson, and asked to write songs for Alice Cooper’s daughter Calico Cooper, and long time bassist Chuck Garric’s band Beasto Blanco. Darren received a scholarship to Guitar Workshop Plus in Toronto, with some of the best players in the business as instructors (Paul Gilbert/Billy Sheehan/Sue Foley). He has shared the stage with such acts as One-Eyed Doll, Wednesday 13, Yngwie Malmsteen, Stryper, Harem Scarem, Beasto Blanco, and Lee Aaron. In the spring of 2019 he joined the Mississippi Mudds Theatre Group to play guitar for a sold out run of Queen’s We Will Rock You. The Mississippi Mudds won the Ottawa Faces Magazine award for Favourite Theatre Group for that year. Boyd is also the recipient of a 2019 ASCAP Honourable Mention. For more information, please visit https://darrenboyd.com/.

Previous JEHRY ROBINSON TAKES US “CLOSER TO THE SUN” WITH HIS NEW ACOUSTIC VIDEO SHOWING YET ANOTHER SIDE OF HIS ARTISTRY
Next Gothic Singer ELLE NOIR Unveils Her New Video: “Like A Black Doll”