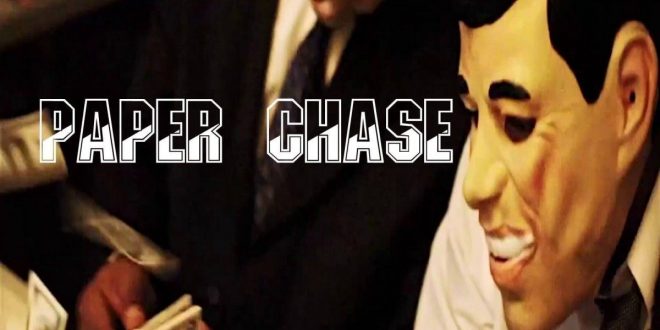 Lumbering out of the speakers with a heaviness that I wouldn’t normally anticipate out of a contemporary hip-hop release, there’s no telling just what Ray Lugar and The Collective Force are going to smash through in their new single and music video “Paper Cha$e;” if you’re wise, you’ll simply get out of their way and let the deluge of distortion and spitfire rhymes come crashing into you like meteorites hitting the earth. Lugar is the star of this show, make no mistakes about it, but next to The Collective Force, he finds a group of musicians capable of giving him the worthy counterpart he needs to make devilishly decadent, nonconformist hip-hop.

Even when we’re in the steady melodic descent of the chorus, there’s never a moment in which we feel as though the music is doing anything but swell and gain mass with every beat we hear. By the time we hit the three minute mark in the song, it’s as though Lugar has stripped off the gloves and has resorted to bareknuckle brutality with the microphone in his hands – his angst bleeds into the riff with an uncontrollable passion, and while the overdrive is a powerful force to be reckoned with, it’s got nothing on the emotionality he’s unleashing through nothing else but his vocal.

“Paper Cha$e” doesn’t invite a pop hook, a trap sample or a psychedelic breakaway into the mix for a second – from the moment we press play to the very second all of the music disappears into the darkness from which it arose, Ray Lugar and The Collective Force seem hell-bent on giving us hip-hop muscularity like no one else has in 2020, and I couldn’t be happier with what they’ve accomplished here. Anyone who ever said the American underground rap scene was waning in skill wasn’t prepared for these guys, and after hearing this cut and seeing its equally powerful music video, I believe you’ll be inclined to agree with me.