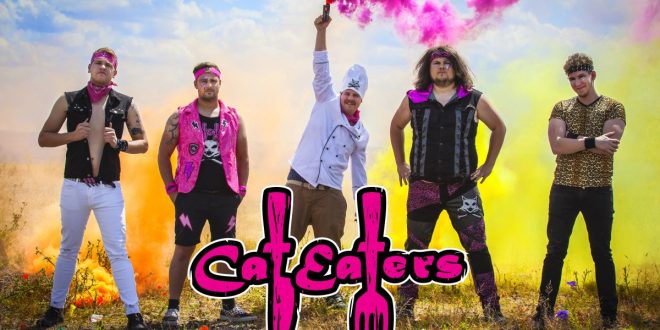 CatEaters are an up and coming independent band who are originally from West Germany and were founded back in 2014. Although the band takes creative influence from the likes of Turbonegro, Gluecifer, Hellacopters , Backyard Babies, blink-182, Ramones and Motörhead, CatEaters amalgamate a variety of stylistic elements from multiple genres to form their unique and original sound that has been described as “Glam-Punk’n’Roll”.

With a plethora of experiences in the music industry, CatEaters have toured across Germany, France, Belgium and Switzerland, in addition to playing multiple shows at Turbojugendpartys; the worldwide fan club of Turbonegro.

The band’s debut EP, ‘First Love’, dropped in 2016 and established the band within their unique genre classification. Since then, CatEaters have released one album: ‘Delicious’, and one single: ‘Weekend’, that are available to stream in their online discography. Their new album ‘RARE’ was recorded in tonstudio45 Lahnstein, Germany, produced by both Kurt Ebelhäuser and Michael Wern, and was mastered by Andreas Jung.