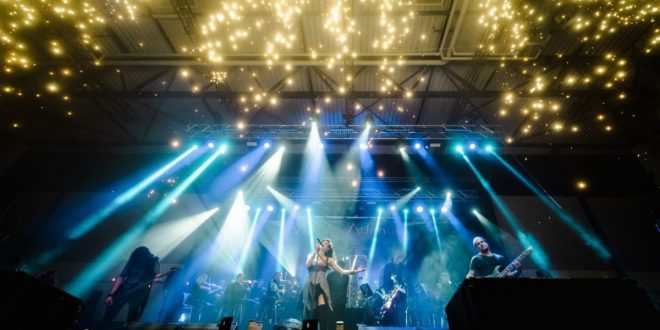 On Friday, Visions of Atlantis released A Symphonic Journey to Remember, their first live album to include a DVD/Blu Ray component. The quintet’s performance, recorded at the 2019 Bang Your Head Festival in Balingen, Germany, stands out for its accompaniment by the Bohemian Symphony Orchestra of Prague, who have only seldom performed alongside metal bands. Following the success of their 2019 full-length, Wanderers, the band is writing new material, utilizing a fresh, straight-ahead process that has unified them amidst the present uncertainty of Covid-19.

I caught up with one of the band’s vocalists, Clementine Delauney, to discuss the genesis of her stage presence, her joining the band, the significance of the new album, as well as what she has gleaned from her multi-faceted career thus far.

On YouTube, I saw a video where you take a tour of your closet and show off your stage outfits. What inspired you to make that video?

It was a nice angle for our DVD – showing the outfits I wore on our tour – instead of just talking exclusively about the music. I thought it was something nice to talk about that was very special.

As I understand, you designed the clothes together with your friend Sophia at Sodurchap. How did you two end up working together?

We were colleagues. At some point, we both worked at the same clothing store – maybe a decade ago, or something – and we instantly became good friends. She was going to school to become a designer, and we kept in touch after I left that job. Then, once I started to realize that I wanted my own stage clothes, we got in touch, and since 2017, we’ve been working together.

That’s really cool! You show three outfits – first, the distinctive one from the Symphonic Journey to Remember show and two from the Wanderers tour, and in both instances, you aim for them to enhance your ability to move. When it comes to your stage presence, does it tend to be spontaneous, or did it develop over time?

Well, I’ve been on stage since the age of five. I’ve done dancing, theater, and a lot of other things. At the same time, I did other physical activities – either sports, working out, or yoga. When you’re a singer, you don’t sing exclusively with your throat; you sing with your entire body, and I think that’s how I move myself. With the songs we’re playing, it’s not necessarily something that I think through as much; it’s more instinctive. Sometimes, I watch videos of our performances just to see how I look (laughs), and I correct things that I think don’t look as cool, but most of the time, I’m just being myself on stage 100 percent.

Do you feel like your stage presence tends to take on different forms, based on what you wear?

Yeah! You always have to adapt, and the clothes you wear condition how you’re going to move in them. If you’re wearing a dress, you wouldn’t act the same as you would if you were wearing pants. I mean, you can, but then it would look weird (laughs). So, these clothes were made based on the way I like to move on stage. I like feeling free, and being able to step on the stage risers without the fear that someone’s looking up my dress, or all those things. My stage persona has the feminine touch of wearing a dress, but at the same time, it’s very warrior-like, as if I’m wearing pants (laughs). It’s that in-between feeling that I like.

It’s cool how you focus on the contrasts between those styles. Taking it back a bit further, when you were growing up, did you embrace classical music and rock music equally?

Pretty much, but at some point, I really dove into metal music, and it became my main source of inspiration. But classical has always been around, and I admit, it’s more around nowadays than it was in its time. Not that I’m done with metal music, but I’ve listened to so many things for a long time that I feel I have to go into something more organic than what metal is about.

Your career began around 2009, and you’ve been in a number of different bands, either as a member, or as a guest vocalist. Before joining Visions of Atlantis, what was it that initially drew you to them, and ultimately inspired you to join the band?

Well, I was in the band Serenity and we were on the same record label. It was actually Visions of Atlantis who reached out to me when they’d been through another huge lineup change. The only remaining original member, Thomas Caser, asked me if I wanted to Join, and the idea was to make a final record with a farewell tour. I felt so sorry for them that they’d reach that point in their career, so I immediately accepted the offer and decided to help them out. It was once we started playing live together that he felt like he had the energy to push this further again and he said, “Maybe we shouldn’t kill the band just yet; maybe we have more to do and to show the world!” So, what was supposed to be a one-and-a-half-year project turned out to be a whole new thing, and I’m still in the band after seven years (laughs)!

It’s awesome how you ended up being the missing piece, in a way. Especially with the pandemic happening, how would you say your chemistry with each other is now?

The downside to being in an Austrian band, when I’m a French singer, is that I don’t get to see my bandmates often, but we do keep in touch online, and we miss touring so much. We have a really nice bond, and we’re great friends. Even though we don’t see each other in person, we’re writing the new album now and we’re being productive, and in the meantime, we have the new DVD out, so it’s not like we’re totally inactive. But we do miss the vibe of playing live together so much.

You have your new album, A Symphonic Journey to Remember, which we briefly talked about before. What do you think that show meant to you, especially given that it’s your very first live album with a video component?

It felt like a dream come true! We’re a symphonic metal band, but normally, when we record, we’ve performed on all our albums with a fake symphony orchestra (laughs). So, for once, just being able to perform with a real orchestra was amazing! We felt complete – like a real fleet, and not just a single ship out there. We felt that our songs were magnified and reached their biggest dimension, and it was really good. We really hope to do it again, because we had it planned for this year too, but then it became impossible with Covid (laughs).

Yeah, with the scale of that show, it’s clear that you miss playing live and have had many wonderful experiences as a result. What is your hope for live music reverting back to what it was, not only as someone in a band, but as a fan of live music in the same way?

Well, I also work in the music industry producing metal shows in my hometown; that’s actually my main job (laughs). To be very, very honest with you, most people in the industry don’t think there will be any live shows like we used to know them – without safety precautions or social distancing – until 2022. That’s pretty much how I feel too. A lot of the shows we had booked for 2021 – January, February, March, and even April and May now – are getting postponed. Maybe if we’re lucky, we can start touring again in Fall of next year, but I don’t know about that.

It’s good though that you’re still going strong, and since you’d mentioned working on new material, how has that been?

To be honest, this crisis actually enabled us to create a real nice songwriting process. When Michele Guaitoli joined, we had already started the process working on Wanderers, so he sort of had to catch a train that was already on track. But now, since we’re not touring, we actually have the time to work better together, and I actually took the time to be in Italy and work with him. It’s thanks to the pandemic, that allowed us to start and design our own process, and I think this is the way we’ll be able to write more personal and richer songs.

In the 11 years of your music career, what have you learned about yourself, both as a musician, and as a person?

Wow, that’s a very vast question (laughs)! So many things. I’ve actually started my own blog, clementinedelauney.com, putting together everything I’ve learned to try and help others grow in their artistic lives, and in their lives in general. It’s hard for me to focus on one thing, but maybe the most important thing that I’ve discovered these past several years is that it’s not about fitting into just one genre, or trying to copy something that others do. When you’re an artist, you chase yourself. You should just go for your happy place, find the joy in what you do, and cherish that. Never be swayed by anything that doesn’t lead you there. Sometimes, that joy isn’t necessarily where you’d think you’ll find it. Even though you like metal and you’re in a metal band, what could really bring you joy is to write songs with someone else in a totally different genre. You don’t know that yet, just because you’d set yourself toward one specific target, but I think it’s important sometimes to let go of dreams that aren’t yours, stay close to the things that really bring you happiness, and not let ego get in the way.

I would like to thank everyone who’s still present around us – all the fans who still buy merch, CDs, and DVDs, and all the people who buy concert tickets, even though we have no idea when these concerts will be. Everyone who engages with us on social media gives us the hope and the feeling that we still exist as a band, because we wouldn’t be where we are without them. They make a real difference and warm our hearts very much.

I come from a family who is passionate about all things music. I learned to sing at an early age, and by 13, had my very own Fender Strat guitar. I tried my hardest at learning all that I could. Because I was born with cerebral palsy, I had to teach myself an adaptive playing style. I learned to write and record my own music, despite these difficulties. In college, I started making great use of my writing abilities by reviewing music, as well as copy editing. I guess it's best to stick with what you know, while welcoming a fair challenge at the same time.
Previous Album Review: Nathan Oliver “Thank You For Your Generosity”
Next Listen: Ultra_Eko – ‘Alternative Realities’