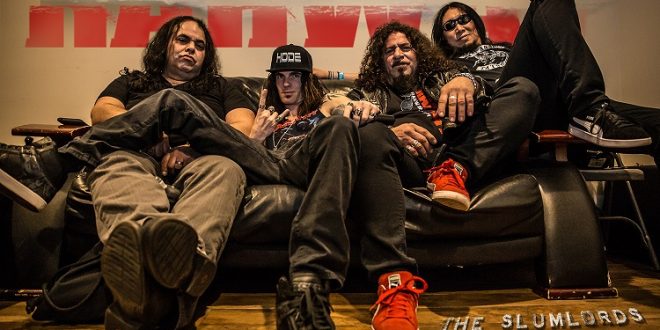 New Jersey based heavy rock band RAHWAY, also known as the Slumlords of NJ (which is also the name of the band’s freshly released EP), has released their heavy rock tale of love, heartbreak, and coping with the pain, “Stone.” Preceded by their poignant video for “Sugar,” filmed during the 2020 Lockdown, “Stone” was produced and engineered by Mike Orlando (Adrenaline Mob) and recorded at Sonic Stomp Studios in Staten Island, NY, while the music video was produced, directed, and edited by Larry Jones (Arc Angel Entertainment).

“This song kicks some major ass, but don’t take our word for it, see what some of the leading personnel in the music industry are saying about “Stone”

“Kick Ass, Hard Rockin’ tune! I imagine myself blasting, horns up, and driving too fast while listening. Love the slow build up, then it kicks in and punches you in the face. Killer track!”
— Sean Patrick – WMGM 103.7 FM – Atlantic City, NJ

Rahway mixes heart and the hardest blistering rock this side of Seether and Theory of a Deadman, they’re guaranteed to get any crowd moving with their intense guitar driven live show. Rahway is a nonstop rock fest, with an unlimited amount of energy, guaranteed for every performance. Since rolling out of New Jersey’s industrial wasteland, Rahway to be exact, these perennial rock underdogs are ready to take over the world! David Cardenas, guitarist, his brother and drummer Steve Cardenas, along with vocalist Nick Hade and bassist Chigger, feel that their latest 5 song EP, Slumlords of New Jersey, is a fresh opportunity to prove themselves as many bands from Jersey have done in the past.

Rahway’s innovative and ever-evolving songwriting makes them one of the most eminent bands of our time. Influenced by legends such as Led Zeppelin, Skid Row, Godsmack, and Motley Crue, their fusion of power is gaining them popularity very quickly. They are impressive and imminent! Rahway is NOW!