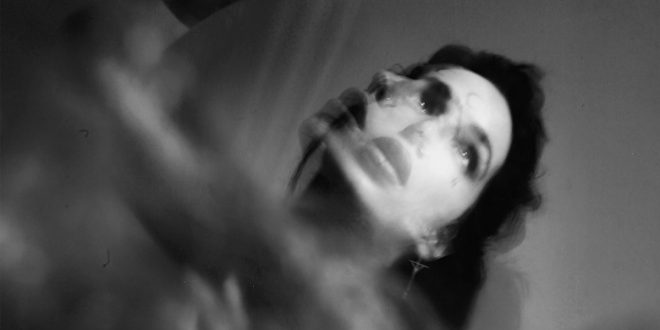 Earlier this year the multifaceted creative force that is Eric13 released his most recent single, Black Lipstick. The song is a genre melding piece that not only showcases his songwriting and guitar playing abilities but also emphasizes his vocal talent. Throughout the song Eric13 seduces the auditory sense with a low croon-like range, hits you with some deep vibratos, and brings it all together with an impressive blend of guitar solos that hook you in and you can’t help but hit the replay button. A departure of styles from the bands he is in, Sex Slaves and Combichrist, Eric13 conceives and thrives in a style all of his own.

Last week, Eric13 debuted the music video for Black Lipstick featuring Chloë ‘Tink’ Rank-Harrington as the protagonist. Music Existence was able to contact Eric13 for an interview via e-mail to discuss the new release and this is what he had to say:

Music Existence: How was your experience working with Tink?

Eric13:Tink is amazing! Surprisingly, I’ve never met her in person, she lives in England, and obviously the lockdown prohibits us from travelling. We were introduced virtually by our mutual friends Keith and Emmi from For the Fly Custom Leather. She was very sweet and professional and easy to work with. The best part was that she understood my artistic vision from the get-go, and it made the entire process a joy. She is an amazingly talented artist.

ME: Is there a particular reason why your scenes were in color while Tink’s were in B&W?

E13: Director Del Cheetah and I originally considered having the entire video be in black and white, but videographer Jeff Cohn was able to capture some colors that gave the video some great vibe. Because we filmed during the lockdown of the pandemic, we had agreed to only shoot in a wide-open space and remain socially distanced. There were giant windows at the location I found, and the sunset gifted us with some intriguing colors and shadows.

ME: There are scenes where both characters can be seen applying makeup and then singing simultaneously, is there a layer of multiple personalities added to the storyline? Does Tink’s character live vicariously through your persona or vice versa?

E13: That is a keen observation. 😉 However I don’t want to give away too much of what’s behind it. I think there’s a few ways the viewer can interpret the video, perhaps relating their own personal experiences

ME: In the end we see the truth of what is really happening to the character. With the revelation that she is locked up in solitary confinement, what was the reason for that?

E13: When making a video, or even a song for that matter, oftentimes the original storyline plan is just a gateway. During the process of making it our concept was fluid, and being apart, each person working on their own allowed for individual interpretations and artistic directions. With that, the video veered off path – but in a good way. The ending also offers some different ideas for the viewer.

ME: How did the video concept come about?

E13: I was following Tink on Instagram and there was one photo that came up that I found so interesting, so unique; it moved me to want to make a video for this song. She really inspired the entire video. I told the director that I wanted to make that photo, her look, into the video.  Thus, we developed it around her, as to utilize her amazing aura.

ME: Making a music video already has its challenges by default, what are some of the added difficulties encountered with everything being remote?

E13: The biggest hurdle seemed that it would be explaining via email or chat, the camera angles, the lighting, and the shots to each other and trying to find a common thread that made sense. But in reviewing Tink’s work, it was apparent that she would be able to deliver cool and interesting imagery. The only real hurdle was time.  I made it a point to have no deadlines and let everyone work on their own schedule. I knew what I was facing, mentally, during the pandemic lockdown; and wanted to be sensitive to the feelings of the others working with me. It wasn’t always easy to be creative or work according to schedule.

ME: Did you have some positive aspects in working this way?

E13: In the end, the time didn’t matter at all. It was ready when it was ready. There was no need to have it out at the same time as the single itself, and any release date was arbitrary. I think it worked out perfectly to have it released when it was – October 13th. The song itself came out on August 13th

ME: When will we get an E13 full length?

E13: I am working towards a full-length album now. I have so many new songs to record!  Most of my collaborators, however, aren’t very close to me in Philadelphia, and I definitely learned a great lesson with this video – don’t be too aggressive with timelines while working remotely. I’m now preparing the follow up single to Black Lipstick, and will likely do a song or two at a time until a full length is ready.

E13: Del and I have been working together since the early 2000’s, having played over 1000 shows together all over the States and the world. More importantly, we’ve already made a bunch of music videos together, he directed and edited all of the Sex Slaves video we put out. I knew as soon as I imagined this video that he would do it. I’m just thankful he had the time.

ME: I saw on IG a while back that this song was inspired by a Nightclub tune. What other bands inspire your creativity?

E13: My song wasn’t’ directly inspired by Night Club, but I do love them. I think what you saw was my ‘Black Lipstick Inspiration’ Playlist, on Spotify. It’s a playlist of bands I like and admire, and some favorite songs of mine that I’ll use to get in the mood when I’m working in the studio.  Night Club, Prayers, Black Sabbath, Killing Joke – these bands are always in heavy rotation for me.

ME: Last but not least does Del have a blooper reel? If so, could I see it?

E13: Actually, yes. This is the first video where I attempted to dance, and some of the outtakes are absolutely hilarious. I hope no one ever sees them!

To learn more about Eric13 make sure to check out the links below:

Concert lover, music fanatic. If it sounds good to me, the rest doesn't matter.
@njaziaddict
Previous AS MANY PEOPLE GRAPPLE WITH THE UPCOMING US ELECTION AND POLITICAL MOTIVATIONS THE JOHNSON PARTY DELIVER A SINGALONG ANTHEM FOR ALL SONG AND VIDEO FOR “CAN’T LET THE BASTARDS WIN” OUT ON OCTOBER 22
Next Interview With Germany’s Sultan Of Pop