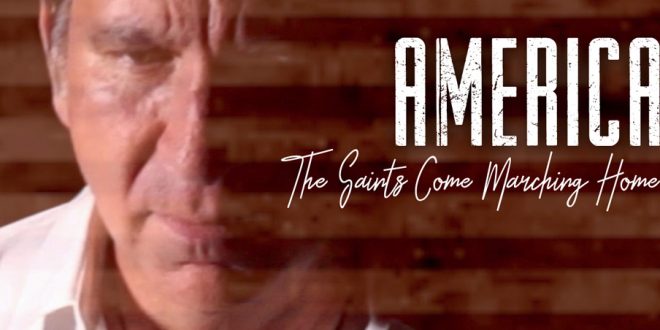 #1 iTunes artist John Vento will release “America (The Saints Come Marching Home)” on November 1st, 2020. The song is from his upcoming “Brick By Brick” album.

With the current political climate and social discourse taking place in the United States and around the world, perhaps there is no better time for the release of John Vento’s new single, “America (The Saints Come Marching Home).” The track is the first single from the award-winner’s upcoming musical project “Brick by Brick.” Release date is November 1, 2020, with pre-sale beginning October 22nd.

According to co-writer/artist Frank Ferraro, “The song was written to call out the injustices being committed by the people against its own people, by both the general population and those seated in power. It conjures up the ghosts of our past and holds them in parallel to the hurtful acts being committed today. ‘America’ is not a battle cry for more acts of destruction. It is a simple call for universal peace.”

Vento adds, ” Extremists from both political spectrums are committing horrible acts of violence. Even though these groups represent a very small fraction of our citizenry, they seem to get all of the TV and social media coverage. When, in truth, most of us are peaceful and despise such violence.”

Watch the music video for “America (The Saints Come Marching Home)” at https://youtu.be/cdB-UEBC-f4.

“Brick By Brick” will be released one song per month, ergo the project’s title. The album started with acoustic-based versions of song drafts that didn’t make it onto Vento’s IMEA Award-winning album, “Love, Lust & Other Wreckage.” Vento will collaborate with multiple writers on the project.

With the single “America (The Saints Come Marching Home),” the first piece of ” Brick By Brick” is in place. On the first of each month, a new track will be released with an accompanying video. Instead of publishing an entire album of music at one time, “Brick By Brick” will be constructed from singles released on digital platforms only.

Vento says, ” I typically create a concept and thematic approach to albums, but with this one I’m just going to let the writing process and the music that comes from it take me where ever it wants. I look forward to an interesting and fulfilling journey over this next year.”

ABOUT JOHN VENTO: John Vento also fronts The Nied’s Hotel Band, voted Pittsburgh’s Best Bar Band in 2016. Through his performances, he has raised more than a quarter of a million dollars for charity. His leadership, generosity and work ethic are well known throughout the Pittsburgh music scene. John is a #1 international iTunes charting artist, a Billboard Magazine Emerging Artist and a 2019 International Music and Entertainment Association Award Winner. He has appeared on Fox, ABC, CBS, and NBC TV. For more information, please visit http://www.johnvento.com.