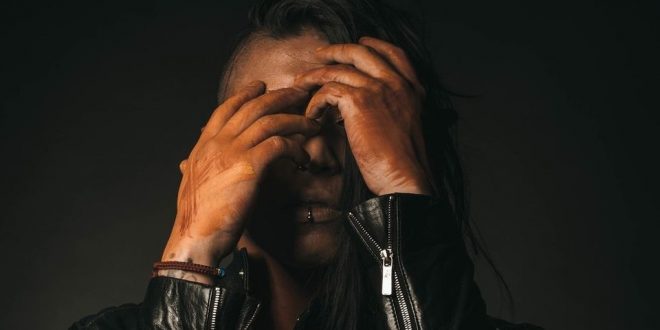 On Friday, Cristian Carver, best known for his live drumming stints in Bella Morte, Panic Lift, and MAN1K1N, premiered his first single under the artist name CARV.R, “Erase Me,” via ReGen Magazine. The single carries nuances of industrial percussion complemented by multidimensional synth tones. Its involvement is rounded out by Negative Gain Productions recording artist Goo Munday, who guests on the track as lead vocalist.

According to Carver, the thematic angle of the song was based on “the act of how partners come to terms with the end of relationships, acting like their counterpart was never even there to begin with and masking their grief with happiness publicly.”

Alongside its opening bass-driven thump, the song feels patient in its initial implementation of the synth and vocal melody. As the song progresses, I appreciate the way the fuzzy, perky nature of the synths matches with the mood of the vocals, leaving breathing room for the accentuated, pumping bass grove. Each element thereafter, in accordance with the song’s meaning, could be interpreted as blissful and newly-carefree on the surface, while also exhibiting subtler, yet gradually noticeable tinges of sadness and anxiety. In other words, it seems to represent the point in which the person comes to terms with how much their partner actually meant to them. It’s a solid debut of sounds that CARV.R carries from his band endeavors, and I’m looking forward to how this project develops down the line.

I come from a family who is passionate about all things music. I learned to sing at an early age, and by 13, had my very own Fender Strat guitar. I tried my hardest at learning all that I could. Because I was born with cerebral palsy, I had to teach myself an adaptive playing style. I learned to write and record my own music, despite these difficulties. In college, I started making great use of my writing abilities by reviewing music, as well as copy editing. I guess it's best to stick with what you know, while welcoming a fair challenge at the same time.
Previous Single Review: Shayne Cook “Matters Of The Heart”
Next DEAD ORIGINAL Releases Official Music Video for “Restrained”!

Montreal, Québec – Slaves on Dope’s Jason Rockman and Kevin Jardine, along with Bill Kelliher of Mastodon, are back with their project The …