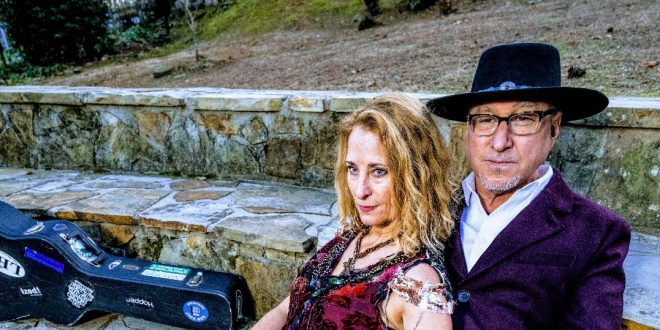 MTS Management Group is happy to announce Five-time Arkansas CMA Nominated folk/americana duo, Ten Penny Gypsy have scored a #1 iTunes Country Song hit in South Africa, with their track, “Your True You.” The song is from their 2020 sophomore album, “Fugitive Heart,” produced by veteran musician and longtime Neil Young guitarist, Anthony Crawford. The album features contributions from Crawford and 2020 Arkansas CMA Nominee for Guitarist of the Year, Buddy Case.

Arkansas singer/songwriters Justin Patterson and Laura Lynn Danley had been writing and performing separately as solo artists for years, when they decided to form the Folk/Americana duo Ten Penny Gypsy in 2017. That decision changed their fortunes immediately, and put their musical careers onto a new and exciting trajectory.

In 2018, “Ten Penny Gypsy,” their self-titled debut album, was nominated for “Album of the Year” at the Arkansas Country Music Awards. The group garnered additional Arkansas CMA nominations for “Americana Artist of the Year” and “Vocal Group of the Year” in both 2018 and 2019.

2020’s “Fugitive Heart” is building upon that success. Recorded over several sessions in 2019 at Crawford’s studio in Loxley, AL, “Fugitive Heart” is an eclectic, upbeat album combining Americana and Country/Blues sounds, that thematically explores the uncertainties of separation. Listeners will find the songs immediately relatable considering the isolation created by the current global health crisis and domestic political climate.

“I don’t think it’s coincidence that these songs came together at this time to form such a poignant collection,” says Justin Patterson, writer of seven of the album’s tracks. “There’s no doubt they belong in 2020, considering how far apart people currently feel from everything and everybody. The distances grew so fast, it was a difficult surprise for many to process.”