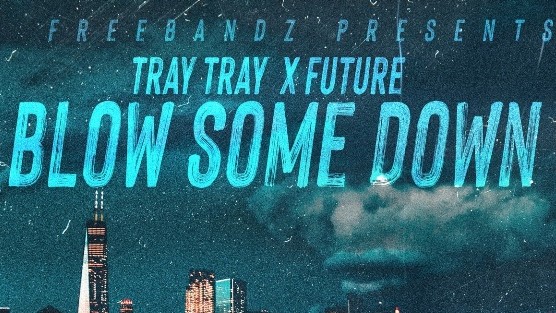 Tray Tray is an emerging artist from Chicago, Illinois. Debuting in the late 2010s, he established his presence in the local hip hop scene by showcasing numerous guest talents throughout his two full-length albums, 2018’s Born Legend, and its sequel, 2019’s Born Legend II. This year, Tray Tray steadily released a handful of singles, with the latest being perhaps his most noteworthy of all – “Blow Some Down,” featuring Billboard-charting hip hop star Future.

Released on Future’s Freebandz label, the single begins with his chorus, which includes a shout-out to Tray Tray and a slew of the label’s other acts. Tray’s smooth, yet direct vocal tonality takes charge on the verses, with allusions to aggressive, gun violence-laden imagery that was popular with contemporary hip hop of the past decade. The percussion from the instrumental accompaniment emits similar throwback vibes as well, featuring jagged, snappy hi-hats and kicks that support a dynamic, reverb-tinged synth melody. While this track may seem much more condensed as compared to his other material, its substance is still present, and the guest spot from Future has earned the song its well-deserved traction.

I come from a family who is passionate about all things music. I learned to sing at an early age, and by 13, had my very own Fender Strat guitar. I tried my hardest at learning all that I could. Because I was born with cerebral palsy, I had to teach myself an adaptive playing style. I learned to write and record my own music, despite these difficulties. In college, I started making great use of my writing abilities by reviewing music, as well as copy editing. I guess it's best to stick with what you know, while welcoming a fair challenge at the same time.
Previous Single Review: “Anthem” by Quianna Crute (feat. Canton Jones)
Next BLUEOX RELEASES SONG AND ACCOMPANYING VIDEO FOR “TEN FEET TALL” ON OCTOBER 2 VIDEO PREMIERING NOW DEBUT EP OUT ON NOVEMBER 20