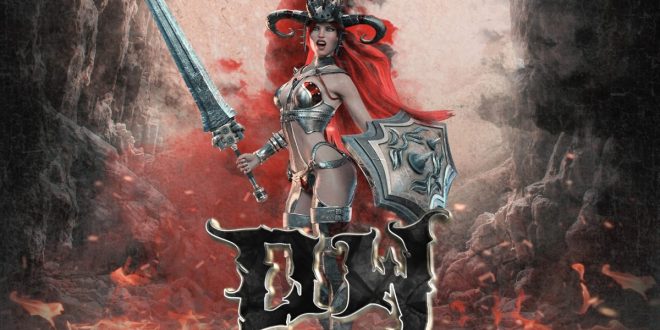 Dan Wande is a Swedish singer and guitarist. While he has only recently put out several successful releases under the artist name DW, Wande actually holds more than four decades of musicianship under his belt. having since fronted regional bands such as Myopic Void, Grave, Vandee, Unit-X, Stella, and SMILE. Equipped with his own studio in his current home of Piteå, Wande has treated listeners to a taste of his abilities in the short form EPs Wings and Way Back. Both were released this year and were mixed and mastered by acclaimed Italian producer Giacomo Pascualli.

DW’s latest release is Dragon Force, a revamped statement of his formative hard rock and heavy metal influence scope, with Pascualli back on board. The titular track reflects Wande’s curious, observational outlook of the world around him, and in the process, confront his inner demons. It is backed initially by layered, harmonic guitars that promptly shift into more of a straight-ahead drive. Considering how long Wande has been singing, his vocals come off quite strong, as well as they exhibit decent range that accentuates the song’s intensity. Pascualli’s welcome return to this project is a factor in rounding out the EP’s presentation, as it provides a combined sense of sheen and balance to the guitars and percussion. I like how the middle track, “Searching,” quickly deviates from the previous power metal arrangement toward one that is more groove-oriented. The lead melodies blend very well with the involvement of the rhythms, and it is interesting to hear how the bass and drums, which are also expressed in a broader context, work subtly enhance them in a similar manner. Wande’s voice has a great sense of command, like a greased up launching pad that adds his heart into the verses and chorus, and really adds a sense of hit potential to the song. By the final track, “Tommyknockers,” this is where Wande combines the expressions of the previous two singles into one solid closer. Inspired by the Stephen King novel of the same name, the song reinforces straightforward headbanging drum dynamics and flowing lead melodies, bringing to mind imagery of one’s mind having gone blurry. To an extent, a similar line-blurring effect occurs at the song’s halfway point, consisting of an unlikely, but wholly impressive combination of a guitar and harmonica solo. After that, an organ solo freely dances through the song’s latter bit, showcasing fair diversity in Wande’s creativity.

Overall, Dragon Force marks another confident effort in Dan Wande’s current solo venture. Despite being another EP of only three songs, each one is packed with thematic and stylistic substance, merit, and top-notch production to boot. With the variation of talent that Wande has showcased so far, I definitely look forward to hearing these songs set the direction for his upcoming full-length album.

I come from a family who is passionate about all things music. I learned to sing at an early age, and by 13, had my very own Fender Strat guitar. I tried my hardest at learning all that I could. Because I was born with cerebral palsy, I had to teach myself an adaptive playing style. I learned to write and record my own music, despite these difficulties. In college, I started making great use of my writing abilities by reviewing music, as well as copy editing. I guess it's best to stick with what you know, while welcoming a fair challenge at the same time.
Previous Richard Lynch Calls On Americans To Pray For Their Country On New Inspirational Patriotic Single
Next Voctave to release sequel album, The Corner of Broadway and Main Street Vol. 2 (Out Oct 6)