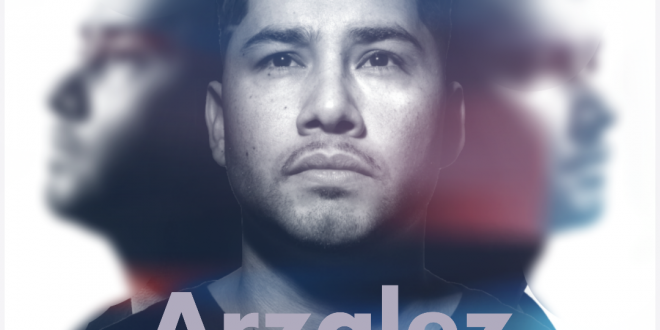 What questions do you ask of your loved ones, of your parents? Do you explore that relationship different then you did when you were younger? In the new song “Preguntame Algo” Arzalez treads vulnerable territory in his polished mix of Latin-influenced pop rock. Dabbling in reggaeton, but truly a multi-genre stew, “Preguntame Algo” is the third offering from Arzalez’s second album, Aquel Futuro Ahora. He sings in Spanish, but music’s universal language translates and transcends to the listener;  the everlasting bond between a man and his parents is still something to be cherished.

Arzalez, whose real name is Gregorio Garza, Jr., honors his parents by combining their surnames (Garza and Gonzalez). It’s hard to pinpoint just one sound that is mostly influenced in his song, but he definitely pushes modern pop and Latin boundaries in the music base. Besides the obvious language difference, there wasn’t a totally convincing moment that I felt like this song wasn’t something that can be heard on Top 40 radio. The rock-fused guitar, meshed with an accordion or keyboard sound (perhaps synth?) opens up a whole other layer. He’s heavy on the bass percussion, casting an electronica net. It’s unexpected. His voice is suave, but can easily take on a range of octaves. Arzalez stays within a fine range in this particular song, but one surmises that he can definitely reach greater lengths. He possesses a strife within his voice – an ebb and flow of sentimentality and excitement for what’s next in his own life. He’s singing from his heart and not just reading words on a page. This song is real to him.

Lyrically, “Preguntame Algo”, (ask me something), is sung like a narrative. He’s conversing with his parents. He asks them to stay in his life, and he acknowledges that his life has greatly changed. La vida es distinta si contigo no estoy, he sings. (life is different if I’m not with you) What made me fall deeper into the layers and interpretations is the feeling of isolation he conveys. He’s not crying or pleading, but there is a bubbling sadness. It’s eye-opening and is nearly on the opposite side of the spectrum compared to the evolving music bed. He invokes a contemplative feeling in both the lyrics and the music; it’s a winning combination, nonetheless.

South Texas’ Arzalez wrote the “Preguntame Algo” lyrics, as well as performed guitars, bass and piano. Charlie Vela mixed and mastered. This song succeeds on many levels, but it’s really Arzalez’s unique approach for a song theme, as well as his unincumbered rhythmic choices. He truly sounds like no one else. “Preguntame Algo” is one of those great songs that converts the listener…Arzalez is one to definitely keep on your musical radar. I don’t think we’ve even seen his best work yet and his latest track is exceptional. It’s noted that he’s a rocker in his press materials, but this title doesn’t fit all that he’s created. No matter your musical tastes, “Preguntame Algo” will satisfy your playlist.