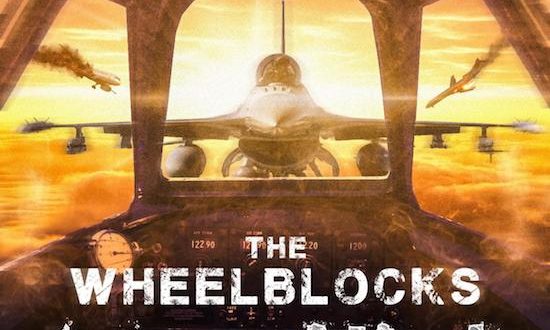 In their debut single, a cover of the iconic “Aces High,” the newly-formed metal supergroup The Wheelblocks dispense a classic thrasher from Iron Maiden that is both heavier than what today’s mainstream standard calls for and stands alone in terms of its fluid stylization. Rather than trying to replicate Iron Maiden’s sound note for note, The Wheelblocks – supported by none other than Chris Jericho on lead vocals in a fantastic guest appearance – give us an updated take on “Aces High” that speaks more to their immense chemistry. Despite quarantine culture, this collaborative single/video combo is giving 2020 the dose of metallic thunder it desperately needed.

There’s definitely a heavy power metal influence over this take on “Aces High” that impacts the drumming (Josh V) and guitar parts (Nita Strauss and Phil Demmel) more than it does the singing we get from Jericho. His vocal is actually the most efficient melodic element for us to behold here, and it balances out some of the more indulgent components of the track in a way nothing else could have. The bombast of the original is still very much intact, but with the introduction of some post-millennium alternative ferocity, it translates as very contemporary and modern.

Rockers and metalheads alike would be wise to check out this quality cover song from The Wheelblocks if for no other reason than to finally discover a band capable of doing Iron Maiden justice. It’s never easy to gauge the shelf-life of a supergroup, particularly in this style of music, but if what this crew has put together for us in “Aces High” is indicative of what they could potentially record together in the future, I think they would be crazy to let this be a one-off event. Impressively produced and performed, The Wheelblocks’ debut is a superb listen for sure.