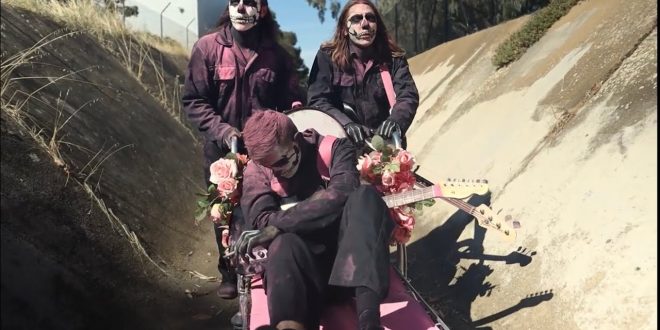 Grinding out a bassline as grungy as it is reminiscent of a noise-laden American punk underground still not properly recognized for its importance nearly thirty-five years after its advent, we find the opening bars of Nocturnal Animals’ “LHW” ready to smother just about anyone who comes in contact with them this September. The vocals are soft and velvety, bringing to mind Sonic Youth and the Pixies, but they’re supported by a foundational groove in the percussion that is a lot smoother and streamlined in nature than anything either of those bands would have recorded in their heyday.

There’s a throwback element to “LHW” that is unavoidable, but as far as how it’s to be interpreted, I wouldn’t go so far as to deem this single an homage to a retro era of alternative rock at all. Nocturnal Animals are prepping to drop their debut album next year, and if this is just a taste of what they’re going to be offering up in that record’s complete tracklist, I would tell rock fans everywhere that they need to be getting excited about the future and what kind of riff-oriented madness it’s going to have in store for us all.

“LHW” is sporting some really great harmonies that start and end with the vocal parts, and personally, I think this component of the song is probably what gives it the most pop appeal, especially relative to what a lot of their peers in the underground have been producing amid the quarantine. The distortion on the guitars is thick, warm and totally free of the artificialities that I’ve come to loathe in a lot of the pseudo-indie content coming out of the woodwork in the last year or so.

Even the grittier attributes to this single work to reinforce the melodicism set forth by our lead singer, and though there’s an inescapable urgency of the rhythm that can be found not only in the beat but in the other instrumentation as well, nothing here ever sounds even slightly rushed or thrown together aggressively. Nocturnal Animals strike me as the type of crew that really takes their craft more seriously than the standard issue rock group does in 2020, and that attention to detail is precisely what’s going to win them the most favor with critics and fans the same this season.

This band isn’t through finishing their rookie full-length, but this is quite the heady sampling of what they can do when they’re inside the studio and nothing is coming between their ambitions and the tools needed to turn dreams into a reality. They’ve got some amazing chemistry, and with the right time and space to cultivate what they’ve already got going for themselves here, I don’t have any doubt in my mind as to whether or not they’re going to find an audience all their own a lot sooner than some of their major label-bankrolled competitors will. It takes more than a sizeable budget to make it in this lifestyle, and Nocturnal Animals show exactly the kind of heart they’ll need to make it big.