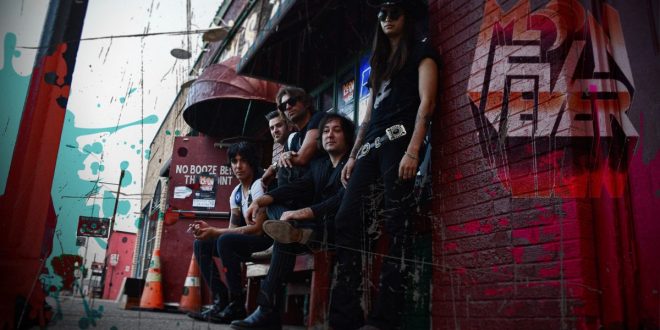 How would you classify Moon Fever’s music?

I would call it 2020 ‘Moon Rock’ with a taste of MTV from 2007. Modern Rock N’ Roll with a nod to the past. We’re a blend of The Hives and The Strokes; with a liberal dose of The Rolling Stones thrown in for good measure!

Who are your top 5 musical influences?

The Hives, The Strokes, The Rolling Stones, Jack White, The Black Keys

What do you want fans to take from your latest single, ‘Shaking Off The Evil’? It’s a bit of a slower, more soulful departure than the up-tempo rockers you have previously released – “Fever‘ and ‘Casanova‘.

We like to mix things up, and this song came out of a writing session that our producer Jim Kaufman set up for us in Nashville with Trick Savage, Blue Foley and Kris Bradley. It definitely had a deep south vibe… If you need to shake off some evil, it’s the song you need to hear!

We know you recently temporarily relocated to Amarillo, Texas from Los Angeles a couple of months ago to be able to play more live shows. How’s that been working out? Is the music scene in in Texas opening back up?

It’s been great actually – Texas has welcomed us. But I still miss LA from time to time. This has given us a great chance to write and record a lot of new songs. Slowly but surely the scene here seems to be on its way to coming back.

When did you know you were destined for career in music?

Fun story, my friend burned me a CD of The Stones “Exile on Main Street” in high school and I was driving home in the country, and thought: “This is all I want out of my life”!

What do you like to do in your down time, when you aren’t playing or recording music?

Personally, I do yoga and have been cooking some killer dinners. I don’t really take too much time off though – we’re always writing and creating.

Which do you prefer: Being in a recording studio or playing live? And what do you like most about playing live?

I love both, to be honest. But nothing compares to the feeling of the band killing it on stage. That energy between you and the crowd is a high you can’t buy!

How have you evolved as a band over the last year – especially being in quarantine?

I think we’ve gotten even tighter, and the songs are getting much stronger. Because we haven’t been able to do a lot else, we’ve really focused on the music – and it’s truly helped us grow as writers and musicians.

If you could meet, play a gig with, co-write a song with, have dinner or have a drink with any band or artist (dead or alive) who would it be and why?

Dan Auerbach of the Black Keys. We could come up with some killer tunes!

What’s next for you – are you staying in Texas for the rest of this year? Are you going to release another single and video before the end of 2020?

It looks like we are hunkered down here in Texas for a while. We should have another song coming out soon called “Cheap Thrills” with an animated music video of Me and Cody (Jasper) causing trouble in LA. Stay tuned!

Previous KRANTZ Release Animated Music Video for Uplifting New Single, “Try Living Every Day”
Next Did Two Singer-Songwriters From The Rural South Just Write The Modern-day “We Are The World” Anthem For World Peace?