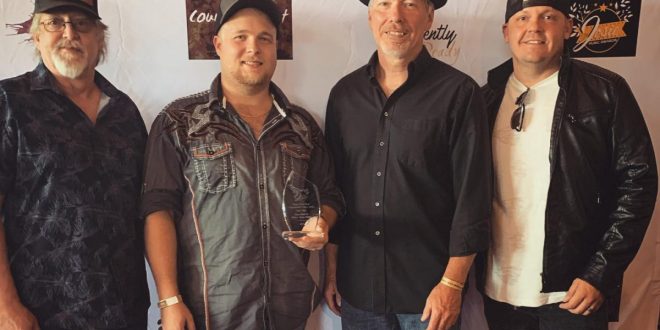 “Woo! We won! Contemporary (Country Male) Song of the Year! Thank you to everyone for making this possible: (Band Members) Robert Mead, Jason Rusiewicz, Ange Giavedoni, John Puckett III..and to my label, MTS Records (based in Pittsburgh), my producer Eric Gunderson of Love and Theft, and my entire family! We are bringing a JMA back to Pittsburgh.”

Originally scheduled to be held at Dollywood’s Celebrity Theater for the 3rd year in a row, the world’s largest indie music awards show was moved to the Country Tonite Theater, due to COVID-19 closures of Dollywood theaters.

The Josie Music Awards is an all genre music award show ceremony which includes a lavish red carpet and many performances. Since its inaugural celebration in 2015, the Josie Music Awards was, is, and remains the largest independent artist award show globally. Certainly, the most gala from the red carpet to the breathtaking venues the award show has been held in such as The Gaylord Opryland Resort “The Springs” building and the world-renowned Schermerhorn Symphony Center Concert Hall, The Nissan Stadium (all located in Nashville, Tennessee) and The Celebrity Theater in Dollywood (Pigeon Forge, Tennessee). Thousands of people from around the globe attend such as independent artists, songwriters, record labels, talent agencies, promotion companies, producers, engineers, management companies, press, music industry businesses, family/friends/fans, and more come out each year to enjoy the performances, award recognition, and the elaborate celebration. For more information, please visit https://www.josiemusicawards.com.

ABOUT GARY BURK III: Hailing from Western Pennsylvania, Gary Burk III’s musical journey began at age 9, while riding along with his dad to their family camp. Drawing inspiration from his biggest influences, Alabama, Jason Aldean and Luke Bryan, Gary fronts his 3 piece band of outlaws, performing at events across the region. Burk III has appeared on major network TV affiliates across the country, including ABC, FOX, CBS and NBC. Locally, he’s performed on Froggy and Y108 radio. He was also a finalist in the 2019 Pittsburgh Idol competition.

When he’s not touring or recording, Gary enjoys spending time with his twin boys and two daughters. A born again Christian, Gary was baptized recently, accompanied by his father.