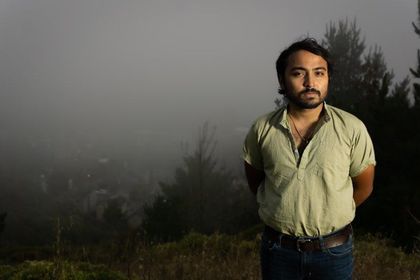 6
SHARES
FacebookTwitter
Oakland, California indie-rock project The Folks Around Town have announced a new album, Sun & Gloom, out September 25th. Along with the announcement, the band has released a lead single, ‘Alligator Swamp (Underdressed)’.

“Most of the record was written after I had finished grad school and was back home in Ohio,” says singer-songwriter Rushi Panchal, “I was unemployed, depressed, burned out and just imploding. The end of 2018 and start of 2019 were some of the most intense months of my life. I was trying to finish up our last album, Basement Years. while also completing a graduate degree and defending my thesis. It was just non-stop. Then, one day, I graduated and my life went from crazy, go-go-go to nothing. I had no where to go, nothing to do, just living back in my mom’s house with her and the family dog. I didn’t know what to do with myself. That’s when I started working on Sun & Gloom.”

The album’s themes and even it’s title are direct representations of Panchal’s mindset as he faced down the Summer months. “Initially, it was just a way for me to cope with whatever I was going through – the weather was warming up, it was beautiful outside and I was spiraling into depression,” explains Panchal, “I think that’s why a lot of the songs sound upbeat and sunny but the lyrics are kind of a bummer. The rest of the album was written after I moved to the Bay Area where even during the winter time, the weather doesn’t change much. Its just a lot of sun, all the time. I was just getting sick of the sun, and it seems like the record is about that.”

Like most things with The Folk’s Around Town, the recording of ‘Alligator Swamp (Underdressed)’ was a collaborative effort. “Musically, I had made the bass part using a software preset and played the rhythm line. I wrote the lyrics on top of it but didn’t show them to Theja.” says Panchal, “Instead, I just sent the music and told Theja to do whatever he wanted to with it. He turned back 90% of what you hear now. We got a drummer, Jai Dhar, to play on it as well as my friend and old band mate Dan Topp – who sang some back up and the very cool harmonies and interlude guitar lines. Alligator Swamp is a perfect example of the project’s collaborative nature. I put the skeleton together and asked people who I trust musically to do what they please with the music.”

The Folks Around Town was started by Rushi Panchal as a means to deal with the frustrations of constantly changing band members. Changing focus from sustaining the typical band format, he decided to take the reins on a studio project where anyone interested was able to come and do their thing on the tracks. While sharpening his skills as a song-writer and arranger, Rushi realized that his mixing and production abilities left a lot to be desired. That is where Theja Ram Pingali comes in. Theja and Rushi met during their time in graduate school at the University of Ottawa and instantly hit it off over their shared love of all things music. As the two core members of The Folks Around Town, the group has released 3 EPs and 1 album. On their first album, Basement Years, the group experimented with electronic textures, programmed drums and pop arrangements over singer-songwriter lyrical themes. With the release of Basement Years also came the end of their schooling, leading to the two living in separate countries. After Rushi Panchal settled into Oakland, California while Theja Ram Pingali remained in Ottawa, Ontario, the two began working on a follow up record. Sun & Gloom sees the group trying to improve upon every aspect of the previous album while also exploring uncharted territory. On the record, the band incorporates more live drum & bass section, less production heavy sonic palettes and a more playful and curious lyrical style.

Connect With The Folks Around Town:

Tags the folks around town the heart riot agency

Previous Single Review: Rick Dorn “Great Things”
Next MONOTRONIC RELEASES NEW SINGLE AND VIDEO FOR “BUY YOURSELF A DREAM” ON SEPTEMBER 25 WITH TWO MORE SINGLES SLATED TO BE RELEASED IN 2020