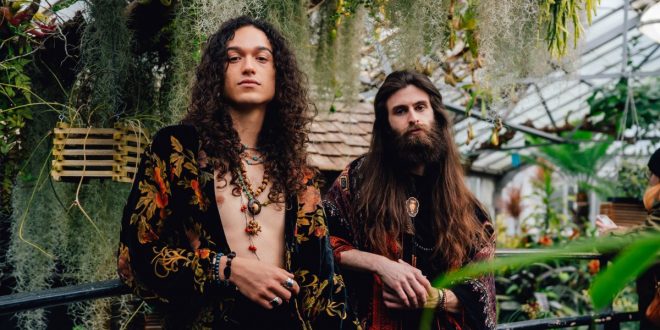 The enchanting progressive rock duo Crown Lands has released their latest video for “Sun Dance” in support of their self-titled debut album, released earlier this summer. The video sees guitarist Kevin Comeau and drummer/lead vocalist Cody Bowles take a psychedelic trip through a greenhouse while crying out their 70s inspired acoustic tune. Like most Crown Lands songs, the video builds up to a monstrous finish to showcase the pair’s impressive and complete sound.

The new single and video comes with an environmental initiative to promote their new music, as well as increase the number of trees planted on behalf of the band. Crown Lands and WEARTH have teamed up to address the environmental issues of deforestation and climate change through the power of music. For every 50 streams of “Sun Dance” the band will plant a tree and also offer fans a chance to win some pretty sweet prizes. To connect your streaming platform to the Crown Lands tree planting initiative click HERE.

Crown Lands kept busy this summer with a series of releases and videos to accompany the new album. The band also released an acoustic EP in June titled Wayward Flyers Vol. I  which saw the band embrace the softer side of guitar rock and tackle an impressive cover of “Birds” by Neil Young.