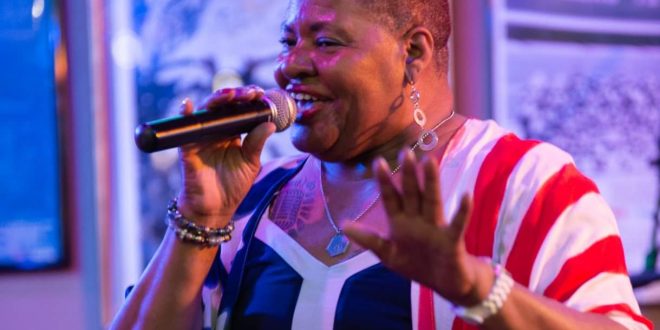 Pittsburgh-based blues vocalist Miss Freddye has released “Wade In The Water.” It is the lead single from her upcoming gospel album, scheduled for Spring 2021.

For the past 25 years, Freddye Stover aka Miss Freddye has been singing the blues throughout her Western Pennsylvania hometown of Pittsburgh. From barrooms and nightclubs, to charity events, VFWs and American Legions, Miss Freddye is often recognized as the town’s Leading Lady of the Blues. In fact, she has also been recognized on the national music scene with two Blues Foundation Awards nominations for her 2017 album, Lady Of The Blues.

Now, Miss Freddye is taking listeners to church with her new gospel single, “Wade In The Water.” The single is a departure for Miss Freddye, a return to her early roots of singing in the church. “Wade In The Water” was produced by Mike Morgan, arranged by Nashville’s Jay Vernali and released on MMM Records. It features Kim Parent on backing vocals. The track is the lead single from her forthcoming gospel album, due for Spring 2021 release. “Wade In The Water” is available on all major digital platforms.

Watch Miss Freddye perform a live version of “Wade In The Water” https://www.youtube.com/watch?v=2MYt7Mwch9M

She has won past blues competitions; 2008 West Virginia Blues Society for Best Blues and 2012 Blues Society Of Western PA Best Duo/Solo Act. In 2014, Miss Freddye was awarded the Star Award from the Pittsburgh VA Medical Center for her work with veterans. She was awarded the 2015 Freedom From Silence Award from the Center For Victims. Miss Freddye has won in the Iron City Rocks Awards for Best Blues Band in 2016, 2017, and 2019. Her self-released CD, “Lady Of The Blues” won for Best Album in 2017.

In 2018, Miss Freddye was nominated for two Blues Foundation Awards, one for Best Emerging Artist CD and The Koko Taylor Traditional Blues Female.