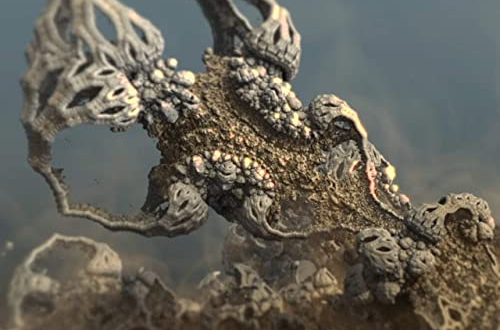 Music videos ideally serve as an extension of the narrative that the original source material tries to express through melodicism or textured beats alone, and in this way, you could definitely say that Sonarpilot’s “Fossil” is a superb offering this summer in every department. The surreal graphic illustrations and color found within the video for “Fossil” undoubtedly enhance the audio-visual experience for anyone who gives this release a peek, and for those of us who enjoy something a little edgier than the status quo will usually allow for, this is a compositional wonder you really can’t afford to miss out on.

At nearly ten and a half minutes in total length, the video version of “Fossil” is as epic as they come in 2020, but I must say that in all of its running time it never forces us to sit through anything particularly bloated either visually or sonically. There’s a slow-churning sensation to every melody we hear in this track, and alongside those melodies we find an imagery in the video that keeps us on the edge of our seats and certain that we aren’t about to run head-first into a slew of dull moments or repetitive beats.

Despite the heavy synthesizer presence, the harmonies in this song feel very warm from beginning to end, and the percussion in the backend of the mix always sounds quite organic and non-artificial in tone. There’s nothing worse in an electronica single of this variety than a plasticized finish that utterly dismantles the aesthetic lying beneath the surface, and Sonarpilot was wise to steer clear of such trite nonsense for this latest release. His style doesn’t incorporate the same shortcuts that his contemporaries’ would, and that definitely puts him a step above the rest when it comes to courting puritan types like myself.

You definitely don’t need the assistance of lyrics to translate the emotionality that comes pouring out of the speakers around the 4:40 mark in the song; it’s made as vividly accessible to us as possible through the amplification of sharp tonalities and a textured rhythm. Frankly, I think verses would have been a bit too excessive for a composition as instrumentally provocative as this one, and in an era that scarcely rewards those who break away from the trends of a jaded mainstream, I can see where it would have taken some courage on Sonarpilot’s part to develop something like “Fossil.”

Electronica buffs young and old alike score quite the addition to their summer soundtrack in Sonarpilot’s “Fossil” this month, and those who haven’t already listened to it – and experienced its must-see music video – would be smart to check it out as soon as they can. In terms of originality and sheer presence, you’d be hard-pressed to find another song quite like this one in any genre before the season has come to an end. “Fossil” might be made for music nerds like me, but its appeal isn’t limited to the annals of the American underground by any means at all.