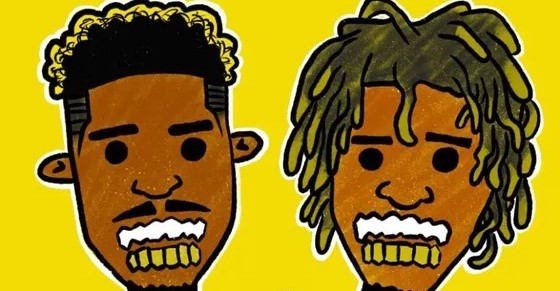 Yelloh is an emerging hip hop duo based in Indianapolis, Indiana. Two brothers, who go by the stage names Liq and M33CH, formed the group after recognizing the potential in one another, having worked in previous projects and offered each other consistent, constructive feedback on their ideas. After debuting last year with the full-length Kiswah Island, the two entered 2020 a revamped force in the follow-up, Yelloh Archipelago.

The album opens on “No Plays,” a windy and atmospheric, yet slightly abrasive track featuring front-and-center vocals and percussion. Even with the rather pronounced presence of the instrumental approach, the contrastingly calm vocal tonality works well in conveying the song’s thematic angle, which centers on calling out artists with artificially generated followings and no genuinely organic support. The theme seems to carry over into the next track, “Midnight Paradise,” further highlighting the shallowness of clout chasers, while this time opting for a more subdued, reggae-influenced vibe. Gradually, I began keying in on how well both the distinctiveness, as well as familial resemblance, of each brother’s vocals serve as complementary factors. While one keeps on with the subdued, yet subtle bite, the other appears higher-pitched, emphatic, and more outright. On the following tracks, “Diamond Cuts” (counting both the original and remix) and “Rocket,” there seems to be an angle centering on decisions when presented with excess – whether to get caught up in its immediate decadent nature, or to simply use their earnings wisely as a means of maintaining self-sufficiency. Toward the album’s midpoint, the instrumental components also seem to take on a somber approach, from the trippy, chorus-tinged beat of the previous track to the bleak, somewhat aloof piano progression of “$$$ Dreams.” By this point, the fittingly haunting, yet smooth tonality of guest singer Ally E is a refreshing touch for pacing the album in capping the first side.

On the latter half of the album, the instrumentation shifts toward a more neutral, perhaps even positive tone. “Yelloh Bay Vibes”. From its chilled-out, wavy approach to the piano sequence, there’s also newfound confidence in the lyrics, dealing with the willingness not to settle for anything less after having been dealt a bad hand once before. Further on, “Gold Medal Winners” and “Sunrise” also do their part in refreshing the pace, as if overcoming the hangover of a dizzying bliss. The closing track, “World Champs,” is rightfully so, based on its fittingly tranquil, jazzy nature, and a clearer focus on living day by day, striving to keep success constant and at the forefront of the mind.

Overall, Yelloh Archipelago is by all means a decent follow-up effort to Kiswah Island. While the instrumentation seems familiar, there’s an improved sense of focus in both the tonal moods and thematic leanings, as well as in the diction and flow of each of the brothers’ voices. I’m curious to see where they go from here, but in the meantime, both albums showcase straightforward, genuine sentiments in both the music content and the album art.

I come from a family who is passionate about all things music. I learned to sing at an early age, and by 13, had my very own Fender Strat guitar. I tried my hardest at learning all that I could. Because I was born with cerebral palsy, I had to teach myself an adaptive playing style. I learned to write and record my own music, despite these difficulties. In college, I started making great use of my writing abilities by reviewing music, as well as copy editing. I guess it's best to stick with what you know, while welcoming a fair challenge at the same time.
Previous YOLO – We Are One ft. Культура Небес
Next Album Review: Glorybots “Invisible”