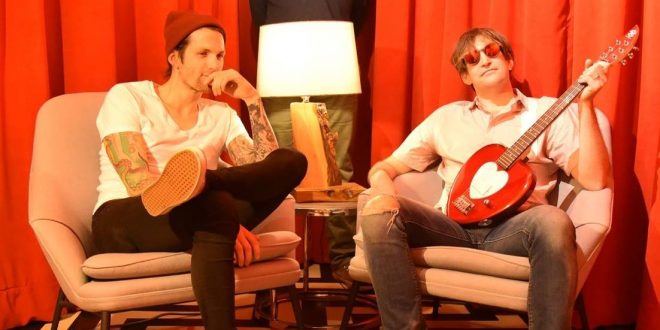 Seattle’s noise underground was a true force to be reckoned with in the mid-2000s and early 2010s, but in recent times, the cratering effect of its biggest names has been mostly absent for a new generation of players in the scene today. That said, Jalal Andre’s Glorybots project is in the headlines this summer, two years after dropping a stunner of a debut LP, with the new album Invisible and its eleven eclectic rock tracks. As much a tribute to the grime of the Melvins as it is a melodic take on a post-noise alternative rock untethered to the trends of a previous era in the genre’s history, Invisible is a spellbinding listen for both audiophiles and those who simply go for college radio playlists over the mainstream mundane.

There’s a lot more of a melodic twist to this record, starting with songs like “Radiate,” “Cumulous,” “Far Away” and “Repent,” than the cosmetics of the instrumentation would initially suggest to us, but then again, anyone who knows Glorybots knows that duality is fundamental to its sound. Andre is never shy about coupling as many conflicting tones, textures and elemental factors together as he can when constructing both pop harmonies and utterly haunting grooves alike, and though it might be a little much for some newcomers’ ears, it’s exactly what I’ve been aching for this summer as an alternative rock critic. None of this content is playing by the rules, but it isn’t advertising rebellion as some sort of lifestyle so much as it is a means of expressing something wholly one of a kind.

“Caged and Confused,” “Blepharospasm” and the incredible “Suicide Hotline” are all purely contrast-driven while other tracks like “London Breeze” and the menacing “Wrong” are more compositionally streamlined, and the juxtaposition is very telling of Jalal Andre’s present depth as a songwriter. If there was ever any debate as to whether or not he could grow into the style of play that he ambitiously compiled in Dark Alien Pop, I don’t think there will be in the wake of this record’s success. Invisible is an evolutionary statement piece for Glorybots, and perhaps a better look at the artistry of its leading man thanks to the constant vulnerability it imparts to us through lyrics and music the same.

Glorybots doesn’t necessarily break any new ground for the alternative rock model in this record beyond the realm of what some critics had predicted for the project at this juncture of Andre’s career, but for the audience Invisible was essentially tailor-made for, it’s a homerun and a half. Invisible doesn’t waste our time with a lot of synthetic harmonies and allusions to sonic grandiosity – it slams into us with tracks like the aptly-titled “Loaded Gun” and Incesticide-style “Me vs You” as though rock n’ roll were about to go out of business forever. This is powerhouse indie rock for an adult audience sick and tired of the patronizing nonsense being shelled out by the mainstream, and it’s absolutely one of my personal go-to records for a groove-laden experience this August.