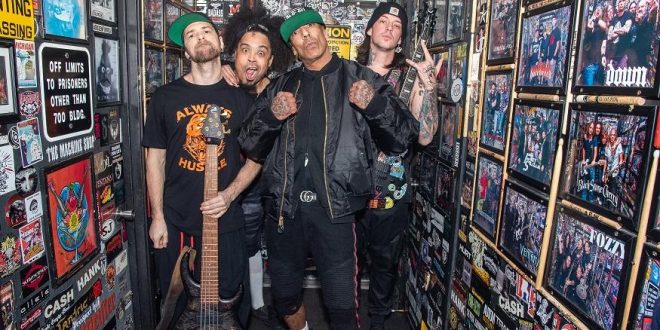 2
SHARES
FacebookTwitter
Legendary SoCal artists (HED) P.E. are set to release their upcoming new studio album, Class of 2020, on August 21 via legendary Californian independent label Suburban Noize Records. The band is set to preview the new album in-depth on their upcoming Livestream this coming Friday, August 8 at 9 p.m. EDT.
The interactive livestream will be broadcast via the band’s Facebook page at https://www.facebook.com/hedpe/ or Youtube page located at https://www.youtube.com/channel/UC-reWg3OvGo9eJnGAp9k-Mw, and will tackle the recording process for the new album Class of 2020, how the COVID-19 pandemic shaped the record and the band’s back-to-basics approach.
On Class of 2020, (HED) P.E. gets back to the raw essentials, utilizing old-school punk-rock guitar tones and aggressive, unfiltered vocal stylings at the core of their trademark sound. Longtime fans will find that Class of 2020 is a return to the classic sound of early (HED) P.E. albums. Listen to the new single “First Blood” online at https://youtu.be/-4nARAGCPO8.
Preorders for Class of 2020 are available now at https://shop.srh.com/collections/hed-p-e-class-of-2020.
In an effort to bring Class of 2020 around full circle and connect it with (HED) P.E.’s impressive back catalog, the album cover is an homage to the group’s breakthrough album, Broke, which celebrates its 20th anniversary a day after the new studio album is released. While planning the milestone anniversary for (HED) P.E., vocalist Jared Gomes was able to connect with former members DJ Product and original guitarist Chad “Chizad” Benekos and rekindle their creative flame. DJ Product created artwork for the Class of 2020 album and added his trademark scratching over some tracks, while original (HED) P.E. guitarist Chizad blessed the band with a blazing solo on “Greedy Girl.” The unholy union that many fans never thought possible came together to connect the past and present incarnations of (HED) P.E. and to enhance Class of 2020 in a meaningful way.

NewYork Based Photographer. Music Enthusiast with a background in Graphic Design. Whether I'm shooting a live event or just out wondering the streets its about capturing the moment.
Previous FLESHGOD APOCALYPSE TO RE-BROADCAST EPIC “LIVE AT BLOOM STUDIO” SHOW THIS WEEKEND
Next Exclusive Interview: NeoSoul/Jazz/Christian Artist HeIsTheArtist