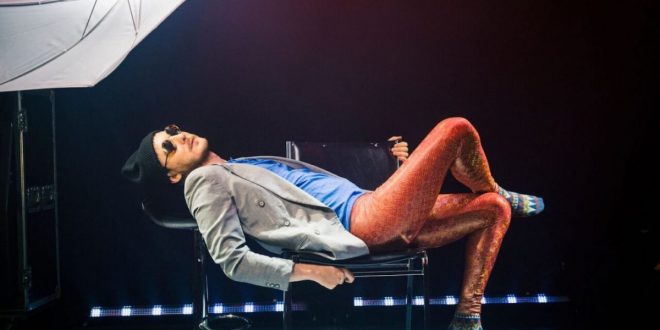 Back in 2019, Bradley “Lailien” Shubat’s debut double LP, Ensoular, received consistently warm reception from numerous outlets upon its release. Soon after, The Toronto, Canada-based indie artist had supplemented it with several videos for the album’s singles, both in conventional and lyric form, and would eventually provide pre-release singles to sustain the momentum for his follow-up album, TA-DA!

In fact, since the album’s official release last week, TA-DA! has since been gaining similar steady traction, thanks to its combined presence on Spotify and YouTube. The album’s opener, “Mr. Gorgeous,” is accessible from the get-go, featuring Shubat’s by now signature approach that is equally conceptual as it is melodic. From the song’s initial phase, the thematic angle seems to center on a man who seeks to redeem himself after solely getting by with his simple charm, which he is fully aware of and uses to his advantage. The subsequent interlude that follows, “In The Name of the Father,” lifts its intro from the King James version of Genesis 1:1, before veering off into a spontaneous meandering of light and darkness, all the while close harmonies gradually enter the mix. These components effectively set the tone for the third track, “Michael Jordan Peterson,” its title alluding to two big names in separate fields – Michael Jordan in basketball and Jordan Peterson in social work. Instrumentally, there’s a type of soaring aesthetic to how the synth and percussion arrangements complement one another. I found that the vibrant depth in the synths seems to represent Peterson, and the reverberating stature of the percussion pertaining to Jordan, while both together represent a combined grandiosity. When the next two tracks, “The Darkness Prince” and “Money” come into play, each pointing to two phases of excess – the initial indulgence, and the extent to which one feels that they depend on it to survive. Capping the album’s first side is “Nubs,” which highlights how the saturation of technology and pop culture have kept us fixated in a similar way. The pacing of the song is unique and refreshing, beginning with pronounced, clashing harmonies complemented by an airy, bouncy, and almost stumbling tempo. I especially like when the song’s title is shouted, with the variations in vocal, synth, and percussion integrated subtly.

On the latter half of the album, the carefree, content nature from the previous song carries over into “The Light Palace,” one of its longer songs that matches its level of involvement. Shubat’s tonality blends in very well with each note of the intro melody, and it sounds just as natural in its instrumental foundation as it does with vocals. As the song progresses, making a return to a bouncy rhythm that is more pronounced this time around, I further appreciate how unique, dexterous harmonies are implemented into the lyrical approach. The second half of the song seems to be where the involvement especially intensifies, the vocals gradually envelop the elements interestingly locking in as if to take total shape of its atmosphere. From there, the momentum captures two states of bliss, accentuated by an impressively fitting cover of the Gigi D’Agostino hit “Fly With You” (featuring guest vocals by Ruby Perl), and followed up by the plateau feeling of “Shibboleth (Shekhinah)‘’. By the penultimate track, “The Wedding,” that level of bliss is captured to a larger extent, coming across as having the foundation of a circus with revolving nuances of delirious unity. Following the remnants of celebration, the final track, “Ta-da” serves as a kind of punctuation mark, with the opener of Genesis 1:1 reprising its role. Afterward, a hodgepodge of white noise and looped space-esque textures dominates the remainder of the track until its relatively distant, fuzz-laden end.

Overall, TA-DA is by all means a worthy follow-up effort to Ensoular. For the most part, each track progresses further into experimental territory, with catchy, hook-laden moments definitely present in solidifying the extent of Shubat’s growth. Whatever happens as this album continues to be heard, I’m already looking forward to what Lailien has in store down the line.

I come from a family who is passionate about all things music. I learned to sing at an early age, and by 13, had my very own Fender Strat guitar. I tried my hardest at learning all that I could. Because I was born with cerebral palsy, I had to teach myself an adaptive playing style. I learned to write and record my own music, despite these difficulties. In college, I started making great use of my writing abilities by reviewing music, as well as copy editing. I guess it's best to stick with what you know, while welcoming a fair challenge at the same time.
Previous Swami Lushbeard Shares “The Truth” – New Single Out July 31st!
Next Gothic Rock Band BLACK ANGEL Crafts Stories Of Love With New Album: Kiss Of Death