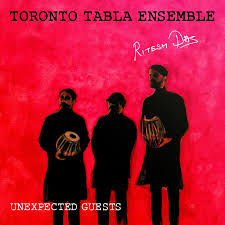 In their latest album, titled Unexpected Guests, veteran project Toronto Tabla Ensemble offer us an intimate look into spiritually stimulating songcraft unlike any other you’re likely to encounter this summer. In tracks like “Maryem’s Here,” “Money Tale” and “Dream Symposium,” Toronto Tabla Ensemble make it more than obvious how little they care about mainstream conventionalities; here, they simply want to cut loose and deliver something that doesn’t look, sound or feel like anything else you’re going to find at the local record store right now. They do just that inside of thirty-five minutes, making this just long enough to qualify as a full-length studio album.

There are some stunning melodies beneath the heavy beats in “Toronto Tabla Youth Ensemble” and the electro-faceted “What’s Going On,” but nothing overshadows the grooves that dominate the master mix from start to finish in this album. Even in relatively multipart spectacles like “Raghupati,” the drums are always a focal point of our attention without crushing the presence of the melodic components in the background. It’s a tightrope walk for Toronto Tabla Ensemble, but they still make it sound pretty simple here just the same (with regards to their confidence, that is).

I really like the dance element in the music video for the title track, and had it not been included here, I don’t know that it would have been quite as lively as it is in this scenario. The shots slam into each other in rapid fire-style pacing, but the overwhelming nature of the composition we’re listening to is actually evened out by the joyousness of the players we’re watching. It’s a carefully thought-out and well-directed piece of material, and if it’s the first thing you experience bearing the Toronto Tabla Ensemble moniker, it should be more than enough to make a fan out of you.

You don’t have to be familiar with the works of Toronto Tabla Ensemble to appreciate what they’ve done in Unexpected Guests, but those who have been keeping up with them over the years will probably be all the more interested in what the group is dispensing here. Popular music has taken many forms in the last few centuries, but in this timeless style of rhythm and harmony, we’re asked to let our guards down and take in something that is both ancient and contemporary at once. It’s an experience I look forward to having again, and I think you’ll agree with me once you’ve heard Unexpected Guests this July.