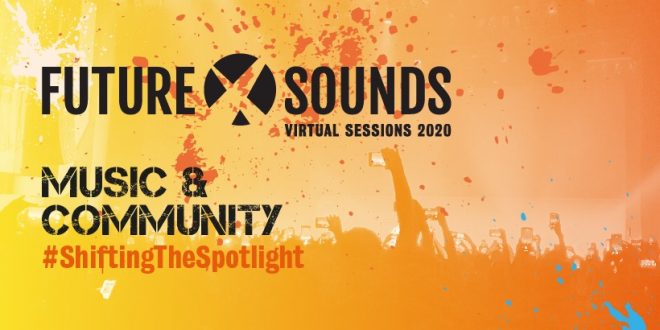 From its inception in 2019, Future x Sounds™ has earned its stature as an alliance of national songwriters, producers, promoters and curators. The Brooklyn, New York music and art-based collective works at allowing these groups an equal spotlight with their up-and-coming peers, as well as celebrating global communities, with an emphasis on creating genuine social change through both mediums. One of its current projects, Future x Sounds: Virtual Sessions, is backed by two-time Grammy Award-winning drummer Chris Dave, Grammy-nominated artists Tank and the Bangas and Georgia Anne Muldrow, and critically acclaimed rapper Black Milk. Earlier this month, they released Collaboration Sessions Vol. 1, each song featuring a revolving lineup of musicians.

The EP begins on the funk and dance inspired notes of “YBB (Young, Black, Beautiful).” Serving as an anthemic, and equally symbolic song alluding to the Black Lives Matter movement, it feels genuinely inviting in its approach. The instrumentation is held together fluently, without coming across as too busy, and its simple foundation allows each element breathing room. Vocally, the song contains both sung and rapped declarations of Black Pride, with phases assuming rhythmic and lead duties throughout. On the track to follow, “Maybe,” Black Milk makes note of society’s subtle means of discrimination, as well as his wavering outlook through the extent of his struggles, utilizing tinges of rap and spoken word. As the song’s somber beat progresses, there also seems to be an increase in his projection as his angle becomes more straightforward. Similarly, the penultimate track, “Question on My Mind,” centers around sticking to that path while also acknowledging the efficacy of faith through adversity. There’s a slight contrast to the presentation – a neutral-mood jazz beat that isn’t necessarily considered uplifting, but more direct in its tonality that points to a grounded stance on life. While the three previous tracks emphasize various anglesOP in the fight for justice, the final track, “Away From You,” represents the fight for people to be together again in the midst of the Covid-19 crisis. Despite the sadness in its nostalgic thoughts of how life used to be, the song once again features an up-tempo groove, encouraging people to dance, and among all things, be in constant motion.

Overall, Collaboration Sessions Vol. 1 suffices a two-fold goal – producing heartfelt and involved songs for a variety of equally-minded causes. Even without the context of its charitable intention, it offers a decent slice of substance that works great on its own. Proceeds from the EP’s sales will continue to be donated to organizations personally selected by the artists, including the Detroit Justice Center, Campaign Zero, Beauty 2 the Streetz, and Trombone Shorty Foundation.

I come from a family who is passionate about all things music. I learned to sing at an early age, and by 13, had my very own Fender Strat guitar. I tried my hardest at learning all that I could. Because I was born with cerebral palsy, I had to teach myself an adaptive playing style. I learned to write and record my own music, despite these difficulties. In college, I started making great use of my writing abilities by reviewing music, as well as copy editing. I guess it's best to stick with what you know, while welcoming a fair challenge at the same time.
Previous Top 25 Billboard Charting Gospel Artist Releases New Single “Glad In It”
Next New Single No Brainer Adrian Jauregui Featuring Breana Marin