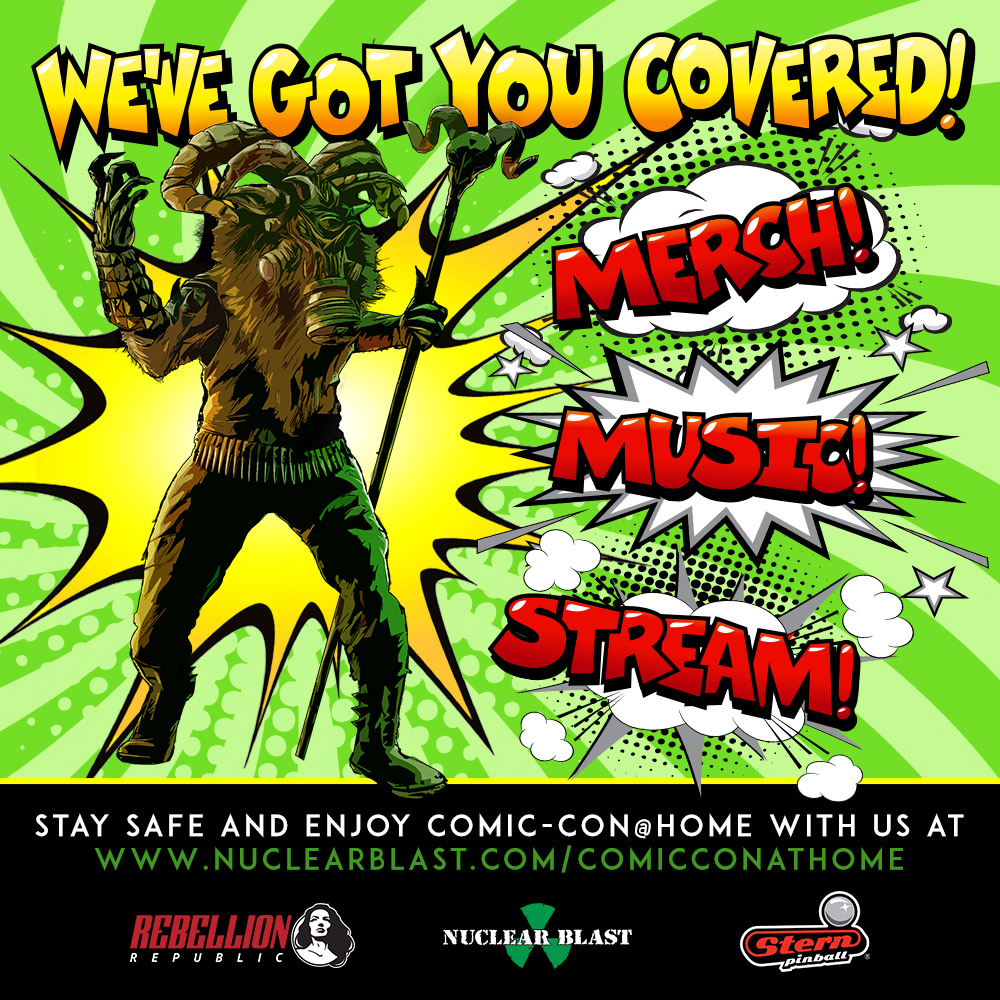 For the first time in its 50-year history San Diego Comic Convention (SDCC), the annual pop-culture celebration, announced that there will be no Comic-Con in 2020. In light of this gut-wrenching news, SDCC is keeping the tradition alive and presents Comic-Con@Home 2020! For the first time ever, people around the globe will get free access to prestigious exclusives and panels that bring over 130,000 people to San Diego, California every July.

This being our 15th year as exhibitors at Comic-Con, Nuclear Blast is pleased to announce our participation in Comic-Con@Home 2020!

Join us at https://www.nuclearblast.com/comicconathome for exclusive products, live streams, and more! Products will go live on Wednesday, July 22. Sign up to the Nuclear Blast Newsletter to be the first to be notified when exclusives are live!

Nuclear Blast’s Comic-Con@Home 2020 exclusives include T-shirts from SLAYER and GHOST, a new Nuclear Blast T-shirt and mesh shorts with pockets to stay-at-home in, and the IN FLAMES Clayman 2020 picture disc featuring custom artwork by Dirty Donny, one of the most influential artists to invade the pop culture scenes of the punk, rock n roll and heavy metal underground! Joining in on the fun are Swedish modern metal heroes AMARANTHE with their “Manifest Comic Book” T-shirt brought to you by merchandising partner Rebellion Republic.

Nuclear Blast takes great pride in bringing heavy metal signings to Comic-Con attendees each year, known for hosting the likes of SLAYER, Kirk Hammett, TESTAMENT, and El Hijo del Santo. This year will be no different. We are happy to announce live Q&As with SUICIDE SILENCE and members of SEPULTURA, EPICA, AGNOSTIC FRONT, TESTAMENT, and AMARANTHE scheduled to stream on the Nuclear Blast Twitch channel! Follow us on Twitch at https://www.twitch.tv/nuclearblast.

Long-time partner Stern Pinball, the oldest and largest pinball designer and manufacturer, brings the hottest new pinball machines to the Nuclear Blast booth every Comic-Con. To ensure you’re not missing out on the latest & greatest from Stern Pinball there will be a live demo of the recently announced Teenage Mutant Ninja Turtles pinball machines on Twitch. Learn about the game here: https://sternpinball.com/game/tmnt/

NewYork Based Photographer. Music Enthusiast with a background in Graphic Design. Whether I'm shooting a live event or just out wondering the streets its about capturing the moment.
Previous Venomous Concept Debuts New Song, “Eliminate”
Next Sylvaine Releases Vocal Play-Through for “Mørklagt”