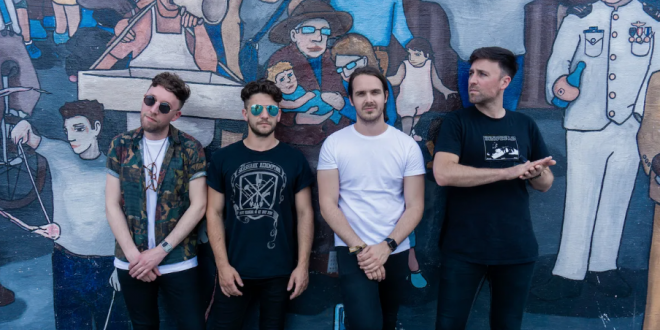 ME: For any readers who may not be familiar with Alvarez Kings, how would you describe your music to a first time listener?

ALVAREZ KINGS: We would say, ethereal and melodic. We like to incorporate synth soundscapes, pop vocal melodies with a base of heavy guitars.

ME: Your newest single, “Words I Couldn’t Say”, just premiered – can you tell readers a little bit about the the single and how the writing process went for it?

ALVAREZ KINGS: It was a song that as soon as we created the idea of it we knew that we had to finish it. Simon had the initial idea of it when his making his spare room into his baby daughters nursery. He said when the room was empty, he found the acoustics awesome and he started firing voice memos over. And yes, the acoustics did sound great! The song is a story of an uncontrollable collision course of self-destruction from drug and alcohol abuse. We like to think of it as the desolation of a failed relationship, and self-blame.

ME: Have you found it difficult to put out new music with the current state of the world right now and not being able to go out and physically promote it or play the new single live for fans right now?

ALVAREZ KINGS: Because of the world we live in and technology available to us, it doesn’t make it too difficult for any artist to put a record out. If Covid hit back in the 70/80s you physically couldn’t put a record out because people couldn’t go to work and actually press the records! We also held back on the release of  ‘Words’ as we all are strong believers of the ‘Black lives matter’ movement happening in the US and the UK. We wanted to give the cause the attention it needed from us.

ME: The state of the music industry looks much differently than I’m sure anyone expected it to in 2020 with no live shows or meet and greets or any in-person fan interactions being able to take place. How have you guys been adapting to the change in the industry? Have you still been finding ways to connect with fans in the midst of all of this?

ALVAREZ KINGS: We have been doing weekly live streams on different music platforms to raise money for our beautiful NHS and it as also been a great way for us to stay in contact with fans and still maintain that interaction. It’s incredible to think how COVID has made us all think differently, but no matter what it’s true to say that the music will always play on.

ME: With the release of the new single are there any plans to put out a new album anytime soon that you can tell us about?

ALVAREZ KINGS: Yes! We have lots of new music ready to be release with the aim of dropping an album later this year. The industry is ever changing and even now more so than ever. Keep tuned in the next upcoming months for lots of live streams, new music and exciting shows which will be coming up, but for now enjoy our latest single ‘Words I Couldn’t Say’.