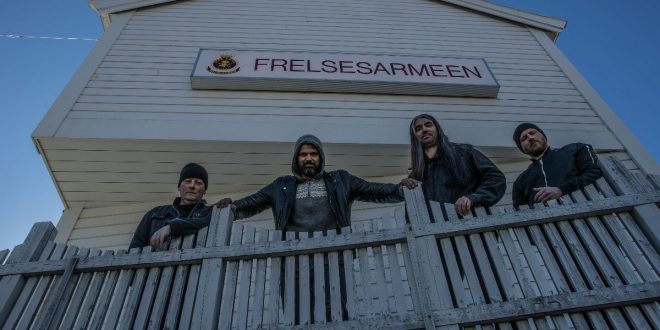 In the beginning of June, Norwegian hard rock icons Vreid streamed a unique live performance that took place against the backdrop of the mountains in their hometown of Sogndal, Norway. The stream was an immense success with over 130,000 people viewers across the globe! Now, the band has partnered with Ghost Cult Magazine to release the video clip for the song “Milorg,” which is the titled track from their WWII themed record of the same name. The video can be seen below.

In addition to the video, Vreid will be reopening the concert scene in Oslo (NO) on August 15, 2020! The historic performance will take place at the legendary Rockefeller venue and will be the first metal show in the city since the Covid-19 closure. The show sold out immediately and due to the demand, a second show has been added.

On this night, Vreid will also launch their very own signature beer, which has been crafted by the band’s guitarist Stian “Strom” Bakketeig and Balder Brewery.

Moreover, the band has finished material for the follow up to 2018’s ‘Lifehunger!’ The new record will be released via Season of Mist during the first half of 2021. The band will enter the studio in early autumn and reports that the spirit in the band is stronger and darker than ever before. The Nordic flame burns stronger year by year!

The band comments:
“It’s strange and weird times for everyone. For Vreid, we have done as we always do, march onwards. I have been working hard on new material for the last months. Started working new stuff last year, but in the last few months things have fallen into place, and we will go into studio soon. I have such a great feeling for the new material, expect an early 2021 release and expect a dark and raw brew.

“Talking about brew, in August we launch our own Vreid Beer. It’s a cooperation with our local Balder Brewery, and its crafted by our own beer wizard Stian. We launch the beer when we do 2 shows at Rockefeller in Oslo on August 15. This will be the first metal show they do as part of their reopening, and we can’t wait to get back out that stage.

“But already this week things are happening as we release a video from the streaming session we did at my mountain farm. The response was completely overwhelming, so we decided to release a video for the track ‘Milorg’ for you. During autumn and winter we will have plenty of new and old (::wink::) news for you all. Fingers crossed that we can return to touring in 2021 as well. Stay strong, act reasonable and enjoy metal.”

Earlier this year, Vreid announced their participation in the prestigious “Songs That Changed the World” project. The band were commissioned by the Nobel Peace Center and Inferno Metal Festival to interpret and cover a song about freedom of expression. The event was slated to take place at the Nobel Peace Center on April 7, 2020, but has been postponed due to the pandemic. The new date is TBD.

NewYork Based Photographer. Music Enthusiast with a background in Graphic Design. Whether I'm shooting a live event or just out wondering the streets its about capturing the moment.
Previous Post-Hardcore Outfit Same Gods Impress On New Album ‘Worried Eyes’
Next Sepultura Welcome Danko Jones To Their SepulQuarta Sessions