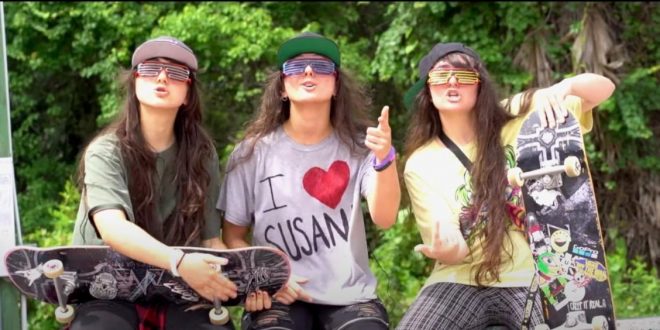 When SONGLINKR, the new video conferencing platform built for musicians, asked Florida-based “beautycore” band GFM (GOLD FRANKINCENSE & MYRRH) to be the very first band to test their new program, the trio ecstatically jumped at the opportunity.
Never a band to shy away from delving into the unknown, GFM relished the chance to be creative with the people who understand them the most – their dedicated fans. The result is “Susan,” a comedic departure from GFM’s usual aggressive style, which balances a Paramore style of melodicism with a Slipknot-like ferocity.
“‘Susan’ is the parody song you didn’t know you needed,” says bassist, vocalist and producer Maggie English. “It’s both THE summer anthem and the comedic relief needed in the world. You won’t be able to get this song out of your head.”
This opportunity came at the best possible time for the band, as the COVID-19 quarantine allowed GFM to busy themselves by setting up their own home studio. The new studio, complete with Joey Sturgis Tones plugins, begged for an avenue to try out the band’s new creative abilities to record and produce music.
“This program connects up-and-coming artists to established writers and producers,” says Damien Starkey, co-founder of SONGLINKR. “Its interface allows musicians to write together from anywhere via video conference and several writer specific tools. You can also stream to all major social media platforms while you are in a writing session and invite your fans to join in. GFM will be the first ever band to write a song with their fans through SONGLINKR and social media.”
GFM used SONGLINKR to write “Susan” along with their devoted fans while streaming to Twitch. GFM wanted the first fanbase writing session to be fresh, fun and familiar to their fans. The ladies employed a character named Derek, whom fans are already familiar with from previous livestreams skits, along with his girlfriend and song namesake, Susan, and skater friends Kyle and Chad. The fans embraced this funny song and wrote lyrics that fit the personalities of the characters.
For the video, Maggie reprised her role as Derek, while drummer LuLu English took on the dual roles of Susan and Kyle, with CJ acting as Chad. GFM went one step further and illustrated this song by producing, directing and filming at the iconic KONA Skatepark, owned by Martin Ramos, the longest surviving privately owned skatepark in the world.
“If you love our YouTube videos, you’ll love this new parody song ‘Susan,’” LuLu, who served as editor and videographer, says.
The video for “Susan” is available today at https://youtu.be/tL_dA_DU01s. The single is also available now via Bandcamp at https://thegfmband.bandcamp.com/.

NewYork Based Photographer. Music Enthusiast with a background in Graphic Design. Whether I'm shooting a live event or just out wondering the streets its about capturing the moment.
Previous Trivium Presents: A Light or A Distant Mirror, A Global Livestream Concert Experience Live From Full Sail University
Next Anthrax Salutes Dimebag with New Signature Bourbon, “The Healer”