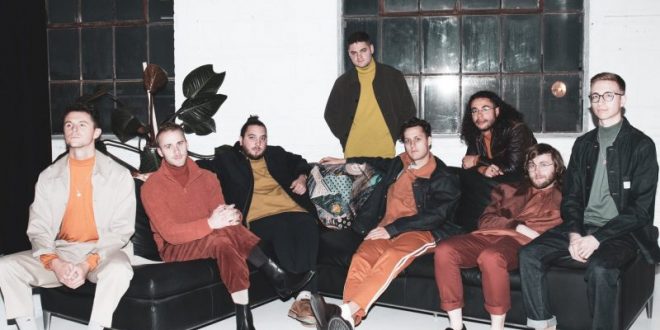 Busty and the Bass is a Canadian octet based in Montreal, Quebec. With an initial pair of R&B and funk-inspired EPs (2015’s Glam and 2016’s Lift) and a follow up full-length (2017’s Uncommon Good), the band punctuated their output by way of high-profile musical guest features, as well as festival appearances. Aside from such local stints as the Montreal Jazz Festival and Rifflandia, their presence would extend internationally to gigs like Pinkpop, The Great Escape, and Made in America, another factor in their amassing 10 million music streams to date.

Today, the band unveils their latest single, “Out of Love,” featuring neo-soul legend Macy Gray, which will be included in their forthcoming sophomore album, Eddie. Bassist Louis Stein was open to discussing the band’s musical chemistry, their current single, as well as what they glean from their success thus far.

Your journey together began at McGill University in 2011. How did that bond start?

We were all studying jazz, and it started out of our need for a social and fun outlet that we couldn’t find in the classroom. So, within the first week of school, I held a housewarming party and invited the people that I vibed with so far. I told them to just bring their instruments and we’ll play, since I was in charge of the live music room. It was really the first time most of us have ever met. Once we played together, that was it; it was nothing intentional.

As you were playing together, how did you eventually find that chemistry with one another?

Honestly, we were like “Let’s just not play straight-up jazz.” Everyone brought something to the table, and it was really beautiful. There was no time where we told each other, “Hey, that sounds wrong,” or “We only play ‘this’ type of music.” Someone would play a chord progression, we’d check it out, and then just build on it with our own ideas.

Taking it back a bit, what musical influences inspired you when you were growing up?

I listened to a lot of hip hop in high school, so it was a lot of A Tribe Called Quest, Dipset, and all these other rap groups from New York. Prior to that, I was studying classical music, you know – cello, trumpet, piano. Once I started high school, though, I was in a super cool music program, and that’s where I discovered the potential for music being a social thing, playing in a band; I’d never seen that before. Then, I started listening to the music that was featured in the movie School of Rock, which allowed me to check out more bands.

There’s a lot of growth in the transition between your EPs and your first album. In all of these instances, you worked with Neal Pogue. What do you like about his style?

He’s an amazing producer and musician, and a father with quite a few kids, so it helps when addressing our egos, insecurities, and strengths. He brings these awesome qualities out of all of us. I think what that allows us to do is really shape our ideas rather than filter them through each other. We run through the tunes, he tweaks a couple parts, and then we head to the studio and record them.

When you look back on those experiences, what you take away from making those albums?

As a band, we realize we’re from a space where we’re more comfortable playing live than in the studio, just because that’s where we started. By the time we got to Uncommon Good, we really learned about how to utilize the studio – having some elements tracked off the floor, and being able to separate pre-production from post-production, and freely moving between the different phases.

Now, you have your new single, “Out of Love.” How did you get involved collaborating with Macy Gray?

She’s a friend of Neal, and both her and our manager are close. A few years ago, we did a cover of hers, and around that time, she reached out to us saying that she loved it. So, when we did this track, we thought it felt right to have her sing on it, since it would be perfect for her vibe. When we heard she was down, we just said “Let’s do it!”

Before that, you released a single called “Kids,” which had the song Baggy-Eyed Dopeman with George Clinton. What is your process when it comes to choosing which singles represent your releases?

When it comes to that process, I think we choose the songs that represent taking a journey into the creative studios of our minds – opening doors, revisiting the old, and exploring the new. It’s like a little trajectory that we aim to take our listeners on. In some way, having songs on an album is like going on a chronological journey. When people get to hear certain things, it’s about giving our listeners that experience.

To me, when I listen to a lot of jammy albums, it almost feels like I’m walking in on a band who seem too into the zone. But with you guys, the atmosphere I interpret from it seems more colorful and inviting. You invite people who otherwise wouldn’t be into that kind of music.

Yeah, I’m glad you appreciate that. That’s definitely the goal. Energy-wise, it wasn’t a matter of pushing people to watch us show off our talent. It was about combining the energy of our playing with the energy of the people around us. That has benefitted us exponentially, so I think we’ve achieved that goal.

When it comes to collaborating with well-known artists, like Macy Gray and George Clinton, does it give you the feeling that you’ve “made it,” or more so, you’ve reached a point that you otherwise wouldn’t have thought possible?

Yeah! I think it’s more the latter. When I think about it, it’s not necessarily that we have a certified check mark. We’re just grateful to have had those opportunities to collaborate with musicians who essentially pioneered the genres we grew up loving. For us, it’s the highest form of honor.

For your new album, especially with these new circumstances, how has that impacted you creatively?

The first thing is that, at the moment, we’re all in different parts of North America, and we can’t all be in the studio together. We also have to find ways to interact with one another over long distance, since we’re unable to spontaneously vibe in a live setting. This new album was challenging, but in a way, it’s been kind of cool because it has forced us into some implementing some unconventional methods for getting our songs done collaboratively.

Because of this, are you starting to realize that the process can be just as effective as when you’re together in the same room?

I think it’s just a different result. When you’re together in the studio, the process for coming up with different parts is a bit more instantaneous, whereas when you’re working remotely, you can spend more time crafting what you’d want your parts to sound like, which is cool.

Up until this point, what have you learned about yourselves as musicians and as people?

The biggest lesson we’ve taken is that we’ve learned to get comfortable in each of our roles. It’s as if we have this ‘ball’ that we toss around that assigns revolving roles of leader and follower to everyone in the group. There’s the assurance that everyone feels valued and valid, trusts each other implicitly, and can lead one another into creative zones that we’d previously thought weren’t possible.

Explore your voice – whether it’s in painting, music, or loving and helping others. Tap into a skill you don’t know you have yet, because it’s constantly strengthening and growing.

Busty and the Bass Socials:

I come from a family who is passionate about all things music. I learned to sing at an early age, and by 13, had my very own Fender Strat guitar. I tried my hardest at learning all that I could. Because I was born with cerebral palsy, I had to teach myself an adaptive playing style. I learned to write and record my own music, despite these difficulties. In college, I started making great use of my writing abilities by reviewing music, as well as copy editing. I guess it's best to stick with what you know, while welcoming a fair challenge at the same time.
Previous Single Review: Ilja Alexander “Butterfly”
Next Josh Christina “Let’s Get Woke”