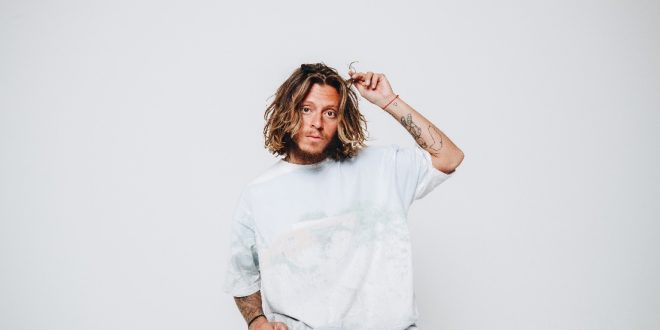 Stay Over is an emerging indie rock artist from Philadelphia, Pennsylvania. Alongside producers Robbie Winward and Cisco Adler, his artistic pursuit is associated with Cocoon Malibu, an organization uniting multiple industries in tandem with music, including visual arts, videography, and recording. Off the strength of debut single “Breaking Glass,” and collaborative follow-up “Girls” (featuring emerging punk rapper Jutes), Stay Over has reached unexpected heights with his current single “Happy.” The song is an anthem for those staying true to their roots amidst ongoing mental health struggles, which rings especially pertinent in the era of Covid-19.

I caught up with Stay Over to discuss the genesis of his music, his formative influences, as well as why “Happy” seems to resonate the most out of all his work thus far.

I grew up in Philly, and I can remember the days running around the city all the time, skateboarding, and playing basketball. I was around a lot of different types of people when I was young – both in Philly, and also in Fire Island, who introduced me to The Killers and a bunch of indie and alternative stuff. But probably my two biggest influences, to this day, are Ben Gibbard – the lead singer of Death Cab for Cutie and Postal Service – and Kanye West. It’s all in their styles of writing, production, and what they generally wanted the sound of the music to be like.

Onto your latest project, Stay Over, was that a direct result of working with Cocoon Malibu?

Yeah! I was on a different musical path when I was younger, writing records either for myself or with friends. But eventually, I got in contact with one of them, who’s a manager, about setting up the project I have now. A couple of months after that, he told me and my producer, Robbie, about this new organization he was starting – basically a house of creatives. We’d live there and be able to get production done, music videos done, and social media handled. He was heavily involved with me and Robbie, coming up with the whole concept of Stay Over, and also branding ideas. Everything would be happening at the same time.

Some of the themes you express in your music involve love, loss, and grief. Would you say that those are personal anecdotes from your formative years?

Definitely. All the times I’ve felt the most emotion, whether it was sad, empty, or nostalgic, was when I was able to dig the deepest in conveying my lyrics and my message. Once I included that level of honesty in my music, showing the ways that I’m an imperfect person, I’d have people tell me, “I feel the exact same way!” And I felt like my music became more honest once I tapped into those parts that I wasn’t in touch or as familiar with. Then, I’d tell myself, “If I don’t like any of those aspects, I have the ability to change.”

I came to know you through your collaboration with Jutes on the song “Girls.” How did you guys get to collaborate?

I met Jutes a few years back at a show in Toronto, but we’d only really started talking within the past year or so. One day, me, Cisco [Adler], and Robbie were working on a record, and in one of those sessions, we ended up writing and recording what would become the hook for “Girls.” Then, once we reached out to Jutes, he recorded the verses for the arrangement, and we were all happy. It came together pretty quickly – in about a month – which was cool. Usually, when we’d cut a song, it would take several months, if not longer, sometimes, so this was fun to put out.

Your most recent single is “Happy,” which currently has over 400 thousand streams on Spotify. Why do you think this song resonated the way it did?

First, I want to say that I’m grateful that many people have been listening. The reason why I think it’s resonated that much is because it’s honest, but also very vulnerable. I wrote the song when I was at my lowest, and I feel like we all have these thoughts that we wouldn’t otherwise talk about openly, and moments where we may feel out of place. Some people out there are even totally alone, and aren’t normally surrounded by those who love them. But by making myself vulnerable, I felt the song would make them feel less alone.

Does it surprise you in some way, while at the same time, remind you of what you’ve been through?

Yeah! In fact, when we did the music video, that actually allowed me to get into that headspace again. It definitely helped me in realizing that I’ve made progress since then. Honestly, I wasn’t expected this big of a reaction (laughs), but I’m thankful and grateful.

You’ve seen, especially on the internet, how fickle people can be, in terms of how they romanticize, glamorize, and even weaponize mental illness. What I got from the song though is that we as people aren’t inherently mentally ill. We’re human beings who simply go through struggles in life, but it’s not impossible to experience genuine happiness.

Yeah, you couldn’t have said it better. It was an admittance to myself, and just me speaking out loud – how to deal with our struggles at the moment, how to get past them, and how to deal with them if they ever come up again. They’re something we all go through in life. I was hiding this pain from people close to me for a long time, because I didn’t want it to affect them, but it felt really good to finally express this the way I did, as if I no longer had to wear a mask.

Aside from Robbie, you’ve also worked with Cisco Adler. How do you vibe with him?

From the time I started working together with Cisco, I’d say our connection has always been pretty strong. Whether it comes to my singing, playing, or getting the right takes, he has always pushed me to do better. He makes sure to take my songs to the next level, and that everything sounds full and as it was intended. We always talk about the best ways to flesh these songs out, and especially with everything going on, it’s those conversations that I value. So, when it comes to that, he’s always been a great mentor.

Do you plan on expanding these ideas into a full-length eventually?

Well, right now, the plan is to release singles throughout the next four or five months. But eventually, I hope to put out an EP, and have a couple features on it as well. After that, my biggest goal so far would be to put out a good quality, full-length album with a resonant message that will last a long time.

As you’ve experienced this success, what have you learned about yourself as a musician and a person?

To be honest, I feel like I’ve learned more about myself during the times when I wasn’t successful – when I was failing and feeling down. Those moments taught me a lot about patience. Now that things are starting to happen a little bit with the songs we have out, it’s made me excited and hopeful for the future. But at the same time, that doesn’t mean I’ll start making less of an effort. I’ll have to really kick it into overdrive, considering all the work that has gone into these last three months. When it comes down to it, it feels good keeping my expectations low, and recognizing that I can still be happy as I was when I didn’t have much going on. I hope that, when all of this is over, I can meet people face to face and hear their stories about how this music affects them.

I just want to say thank you, and I love you. People don’t know how much their feedback means to an artist, whether it’s through comments or messages. It means a lot more than they think. Every time I’ve gotten messages on Instagram from fans, they tell me how much they relate to the music. They thank me for having my music around during certain times in their lives. I appreciate that as an artist and a person, and I hope to help more people in the future as I release more music.

I come from a family who is passionate about all things music. I learned to sing at an early age, and by 13, had my very own Fender Strat guitar. I tried my hardest at learning all that I could. Because I was born with cerebral palsy, I had to teach myself an adaptive playing style. I learned to write and record my own music, despite these difficulties. In college, I started making great use of my writing abilities by reviewing music, as well as copy editing. I guess it's best to stick with what you know, while welcoming a fair challenge at the same time.
Previous Jesse Neo Reflects on Expanding from Music to Tech
Next Dark Heavens Signs With 7Hard Records