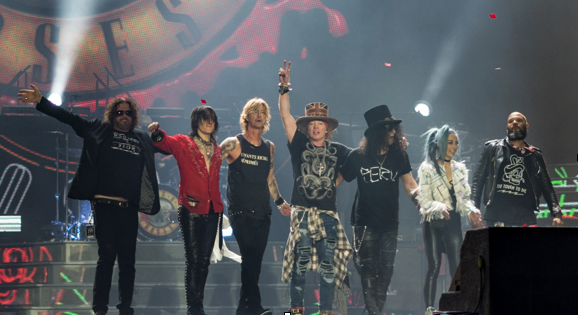 The History of Guns N’Roses

How It All Started

The new band quickly formed, but after deciding to tour in Sacramento, California, Duff’s hometown, Seattle, drummer Rob Gardner left and was replaced by Slash’s friend Steven Adler. The band, which continued to be called Guns N ‘Roses even after the departure of the Thracian Guns, decided its first stable composition in the so-called “Hell Tour”. In an interview, Slash says, “This was the thing that cemented the band,” and established his chemistry.

The awards that the band holds are not few, having a vast history in the field of music. The most important would be: Best New Artist – MTV Music Awards (Welcome to the Jungle) – 1988,  Favorite Pop/Rock Single – American Music Awards (Sweet Child O’ Mine) – 1988,

A Band to Remember

Guns N’Roses is a very well-known band worldwide, with a very vast history and an enormous importance in the musical culture from the launching of the band to the present day. The band’s name has been and is used in many fields … such as gastronomy, some dishes bear the band’s name or abbreviations. Another example would be online games, many developers use the name of the band to the characters or even the name of the game, for example online casino platforms have a game named after this band. Being world famous is a very good method in gaining benefits for various fields. Custom clothes with the band are in high demand, real fans get them to show their support for their favorite band.

The debut album Appetite for Destruction (1987) sold 28 million copies worldwide and topped the US charts. This material includes some of the band’s best-known songs, including “Welcome to the Jungle”, “Knockin ‘on Heaven’s Door” and “Sweet Child o’Mine“. The success of the debut album continued in 1988 with the release of the album G N’R Lies and in 1991 with the release of the double album Use Your Illusion I and Use Your Illusion II, material that ranked # 2 and # 1 on the Billboard 200 and has sold over 35 million albums worldwide.

The Spaghetti Incident cover album released in 1993 was the last material recorded with Slash, who left the band in 1996, forming the group Velvet Revolver. Slash’s reasons were related to Rose’s disrespect to the public and staff during the Use Your Illusion Tour, the legal manipulation by which Rose forced his bandmates to relinquish ownership of the band’s name in favor of and the departure of Steven Adler and Izzy Stradlin from the band.

After a 10-year hiatus and various line-up changes, Guns N ‘Roses came to market with the album Chinese Democracy (2008) which debuted at number 3 on the Billboard 200, exceeding everyone’s expectations.

Stephen Vicino is the founder of MusicExistence.com. He created this site to give talented musicians a voice and a way to be discovered.
@@svicino
Previous Litvar Presents new single ‘Hi I’m Andy’
Next Jett Jones – Hit the Road (Official Music Video)