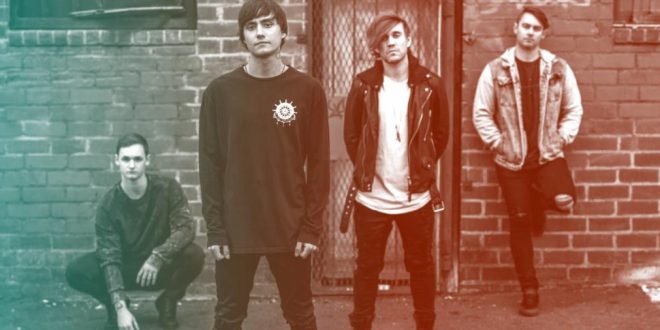 1
SHARES
FacebookTwitter
Rising alternative pop-rock band Between Kings has released the Antidote EP today via The Regime. PRESS HERE to listen. Produced by Jimmy Messer [AWOLNATION, Kygo, Kelly Clarkson, Selena Gomez], the new 4-song EP is named for the band’s radio single “Antidote,” currently making waves at alternative rock stations across the country and rising up the Alternative Radio chart. With its personal take on mental health, “Antidote” is a non-judgmental observation of how people cope with the pressures of modern society – a timely topic as the world navigates the heightened pressures of our altered lives. Between Kings has also issued the music video for another featured track on the EP, “Too Young To Give A Fuck.” The band called upon their fans worldwide to submit videos of them dancing and singing along to the anthemic song – PRESS HERE to watch. The Antidote EP, also featuring “Bad For Me” and “Show Me What It’s Like To Love,“ is the first half of new music coming from Between Kings this year, as the coronavirus affected the rollout for their full-length album, Young Love, which will now be released at a later date.
“Everyone in the world is struggling, not just with coronavirus itself but everything that has come along with it – loss of loved ones, jobs, stability, loneliness and a massive rise in mental health issues,” shares the band. “We’ve also been hit by this too as plans, dates and events were pushed or canceled. The full album release date kept getting pushed back due to studio time, but we, and our team, really wanted to be there for the fans in this hard time and bring some new music on the original release date. So, we’ve broken the album up into two parts! We’re actually really excited to do this so we can give something to everyone now and when the lockdown and restrictions start to lift, we can get everything back on track to bring the second half to you later in the year. We truly feel like this is our best work and we hope you enjoy! We’ve put so much time and passion into these songs that we are proud to say we’ve found our signature sound!”
About the new video for “Too Young To Give A Fuck,” guitarist Jordan Coyne adds, “Everyone right now is locked in their homes and, for some, it’s a cold and lonely time. We really wanted to connect and bring people together so we thought it would be fun to reach out to fans to get them to make their own videos for this project. ‘Too Young…’ is all about how you feel inside; it’s an attitude. I have a grandma and she’s still too young to give a fuck!”
The Australian-bred, Los Angeles-based quartet – Nic Machuca [vocals], Jordan Coyne [guitar], Jayden Marsh [bass], Nick Fanning [drums] – are at once a throwback to those times when rock ‘n’ roll music could save your life and a glimpse into its possible future. Between Kings released their debut album, The Escape, in 2018, which showcased their penchant for arena-rock choruses and emo-punk influences like Blink-182, Red Hot Chili Peppers, Linkin Park and Rage Against the Machine. With the help of Messer, their new music demonstrates a real progression in songcraft, a modern-day pop hybrid that incorporates scratching, synths and even hip-hop beats to a classic rock palette that evokes both The Beatles and U2. Between Kings, whose music has been streamed over 1.5 million times on Spotify, started out playing open mic nights in Brisbane before tackling the club circuit and then becoming one of Australia’s top touring attractions, including an outing with Escape the Fate. Now based in the States, the sky is the limit for the young four-piece.

NewYork Based Photographer. Music Enthusiast with a background in Graphic Design. Whether I'm shooting a live event or just out wondering the streets its about capturing the moment.
Previous Negative Thought Process Release New Album ‘Hell Is… Much Better Than This’ Today
Next Electronic Act SHADOWS AND MIRRORS Announces Their New Full-Length Release, Levels