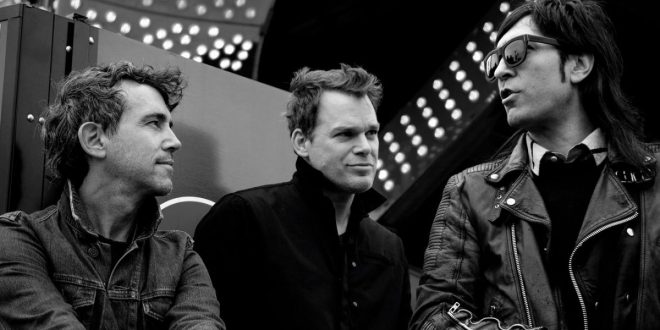 Princess Goes to the Butterfly Museum is a New York-based supergroup led by actor Michael C. Hall, best known for his roles on television (HBO’s Six Feet Under, Showtime’s Dexter) as well as his longstanding presence on Broadway (Skylight, Chicago, Hedwig and the Angry Inch, et al). Formed in 2017, the band is rounded out by two other musicians, Peter Yanowitz and Matt Katz-Bohen, both of whom achieved recognition in several acclaimed acts throughout the 90s and 2000s. With a relaxed, yet surging chemistry, this trio crafts an identity combining rollicking showmanship, alt rock-styled noise, and smooth R&B. Their self-titled debut EP was released April 2nd, while a full-length follow-up is in the works.

I had the pleasure of catching up with the band to discuss their formative years, their debut EP, and the workings of their upcoming album amidst the presence of Covid-19.

Before we talk about the band, let’s talk about your previous endeavors. Michael – In addition to music, you’re also known for your lead roles in Broadway and acting. What aspects do you take away from them that you’ve applied to this band?

I think the biggest thing I’ve taken from them is the experience of being on stage in front of an audience. That stuff influences me the most when it comes to performing live, and being able to share these moments with them. As far as how it fits into what we do musically, I’m not sure if I’d point to the Broadway stuff specifically, but if you think about it, everything’s an influence – probably stuff we didn’t even think about.

Peter – You made your bones with the Wallflowers and Morningwood, and also collaborated with Billy Bragg and Wilco for the Mermaid Avenue album. What did you gather from those times?

Each band I’ve been in has a lot of different influences. In the Wallflowers, I was the drummer. I formed the band with those guys, and I think that gave me the strength and imagination to start Morningwood. I switched from drums to bass, and started writing songs at that point, too, so that was a challenge to grow from. As for Mermaid Avenue, I was friends with the producer of that record, and he called me in to play percussion. I’m glad to have been able to do that, ‘cause it’s just a fucking awesome record!

Matt – Back in the 2000s, you played primarily in the New York City indie scene, initially in the band Variety City in the mid-90s, who then changed its name to Daddy later on. What was it about being a part of the New York City scene that really resonated with you at the time?

When I look back at that time, it’s like wow! There were so many amazing parties and shows that Peter’s band, Morningwood, and my band would play – a bunch of crazy shit (laughs). I guess it’s still happening. Obviously not now, at this current time, but it’s funny. You always hear a bunch of people say, “Oh, it was so much better in the 70s, or “Oh, it was better in the 90s,” but honestly, I think it was better in 2005 (laughs). It’s a little silly to say, but for me, it’s true.

You even got recognition from Thurston Moore of Sonic Youth. That must’ve been huge!

Damn, that’s not even in our bio or anything, so it’s crazy you mention that. Yeah, my friend, who lived in a building with Thurston and Kim [Gordon] gave him some music of ours to check out, and he gave us that encouragement. It was awesome, because I think Sonic Youth really influenced our sonic landscapes.

Going back a bit, when you guys were growing up, which kinds of music spoke to you?

Peter: Guns N’ Roses was a huge influence on me. When Appetite For Destruction came out, that was a real game changer for me. Everyone back then wanted to be this big band. I also loved Black Sabbath before that, and after Guns N’ Roses, it was Nirvana, so it was kind of like a progression of genres – Sabbath, then Guns N’ Roses, then Nirvana.

Matt: I would say Prince, after seeing him on MTV. It was pretty huge. I saw him as the ultimate guy who could do anything. He played guitar and could jump and flip into a split – that was pretty formidable. Then, of course, seeing Slash, I was like, “This is the coolest guy I’ve ever seen in my life.” Yeah, those two stood out to me.

Michael: When I was a kid, my favorite band was Queen, and then when I was a little older, I really liked the Cars, Violent Femmes, and Fugazi. I can also remember hearing the Joan Jett and the Blackhearts song “Crimson and Clover” on a mixtape. I was listening to it in the mall or something, and I was like, “Oh yeah, that’s the sound of what I want my life to feel like,” and it hasn’t really changed (laughs).

As you’ve transitioned into Princess Goes to the Butterfly Museum, what can you say about your chemistry with one another?

Michael: It’s not something we normally talk about, but even though we’re different musically, it feels really good. I think it’s a very rare thing to be locked in and have a kind of creative shorthand between the three of us.

Matt – Your daughter came up with the band name, is that right?

Tell me about how the name choice transitioned into you guys putting the band together.

I’d asked my daughter, “If you could come up with a hypothetical name for a band that you would have, what would it be?” She said, ‘Princess Goes to the Butterfly Museum,” and it just sort of worked. When we put the band together, I was like, “I have this name my daughter came up with,” and the guys were like “Hey, that sounds really cool!” At that point, we just couldn’t leave it. We actually tried several different names; one of them I really liked was one Mike’s wife came up with, ‘Pantera Canada’, since we couldn’t use ‘Pantera’ alone for obvious reasons (laughs). That was on the table for a minute, but then this name ended up giving us our whole aesthetic.

Let’s talk about your releases. The first single, “Ketamine,” seems to have been the real door opener for you. How did you guys react, in terms of experiencing that initial success?

Matt: At first, we kind of doubted ourselves, but then we were like, “What the hell is this?”

You have two other singles, “Love American Style” and “Talk to Me,” which are also part of your debut EP. In general, for these songs, how do you divide up the writing process?

Peter: I don’t think we divide it up any more than we just write all different ways. Sometimes, we’re all in the same room, and sometimes one of us takes the lead and the others follow. There’s three of us, so it’s three separate imaginations, rather than one particular way of writing. We just write different things and try to keep it fresh.

To bring that sound out, you worked with Tom Elmhirst on the mix. How did he transform the presentation of the EP?

Matt: We’re all fans of Tom’s work, and we’d heard it in the form of Bowie, The xx, and Adele. He really does bring out that thing, whatever that thing is.

Peter: He was really good with us at the very beginning. He met Mike through Lazarus, I believe, and he’d mixed the last Bowie record. Once we invited him down to our clubhouse and played him some stuff, he said he would be happy to mix it. He helped us early on with finding the sound, and part of it involves running our instruments through these cool reverbs, digital delays, and using an analog board from Electric Lady Studios. He’s working with a younger assistant, Brandon Bost, who’s mixing our next record right now. He’s just a really good friend, influencer, and supporter of our music. When he first heard “Love American Style,” he was like, “Wow, this is really different, and not what I was expecting.” That gave us a boost of confidence to really get into our stuff, so it was huge.

With this new album, will you see an expansion of these themes, or a bit of a contrast?

Michael: Maybe more of an evolution than a contrast.

Peter: Yeah! We were thinking of just going ahead and making this a full-length record, since we figured we have time.

In other words, this won’t be a one-off project, but a consistent band that will put out more material in the coming years?

Peter: We hope so. We haven’t stopped working in the two-and-a-half years we’ve been together. Our goal, before this crazy shitstorm happened, was to release as much music as possible in 2020, and that hasn’t changed. In fact, it feels more urgent, since there will be no touring for a while and all the stores are closed.

Matt: Thank you for being our fans!

Michael: We really appreciate you.

I come from a family who is passionate about all things music. I learned to sing at an early age, and by 13, had my very own Fender Strat guitar. I tried my hardest at learning all that I could. Because I was born with cerebral palsy, I had to teach myself an adaptive playing style. I learned to write and record my own music, despite these difficulties. In college, I started making great use of my writing abilities by reviewing music, as well as copy editing. I guess it's best to stick with what you know, while welcoming a fair challenge at the same time.
Previous Single Review: Sanya N’Kanta “Can’t Stop Thinking Bout You”
Next Banfi To Release Second Album ‘Colour Waits In The Dark’