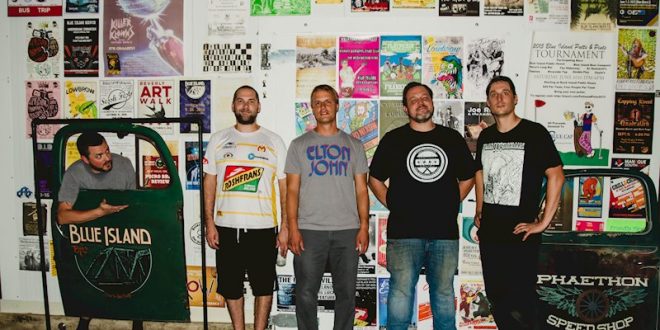 Today Chicago-based hyperactive stoner fuzz unit Hÿss release ‘Extraterrestrial.’ Less than a year on from the release of Hound, the band was holed up in Bricktop Recording studios and set out to bring you yet another five-song ripper by the name of Extraterrestrial. While a couple of these songs have existed in one version or another since the earliest days of the Hÿss, all have been reworked and updated to the satisfaction of all involved. The clincher here is the brand-new tune and title cut “Extraterrestrial.” With commanding yet relatively straightforward riffs brought to you by bassist Bill Sullivan (guitarist by trade), the song conjures up apocalyptic visions of UFO fear and obsession including the abduction of Bill himself as he’s out walking his dog. The result is the Hÿss at their most cinematic, a definitive high-water mark in their songwriting powers thus far.

Another track worth a mention is the incomparable “Disco Frankenstein.” With its Kennedy/Sullivan spun tale of the chainsaw-wielding, disco-dancing monster, the rollicking tune has been a fan favorite and live staple for years, but it’s never quite gotten the proper treatment on record until now. With the help of keyboardist Chris Walsh’s (Chi-Town Kids, the Hemispheres) stellar performance, the band has finally given Ol’ Frank the full-bodied musical muscle flex he rightly deserves. Closing out the set is the fully reworked “In Shadows” (a dark but loving tribute to John Prine) followed by stone cold Hÿss classics “Panther Slide” and “Wolf Spider.”

As with Hound, the massive sound of Extraterrestrial is brought to you by Bricktop’s Pete Grossmann (High Priest, Something Is Waiting) who expertly recorded, mixed and mastered this beast of a record. And to tie it all together, Romanian collage artist Larisa Murariu was tapped to create the old school sci-fi/horror themed cover.

NewYork Based Photographer. Music Enthusiast with a background in Graphic Design. Whether I'm shooting a live event or just out wondering the streets its about capturing the moment.
Previous Lamb Of God Issues Statement on New Release Date for Upcoming Self-Titled Album
Next Steel Panther Release Music Video For “Let’s Get High Tonight” on 4/20