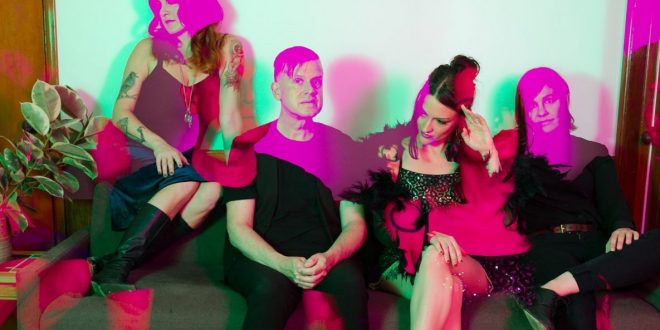 Bizou features current and former members of Light FM, The Smashing Pumpkins, Wax Idols and Glaare. Combining propulsive darkwave rhythms, shifting synth scales, haunting vocals and a wall of shivering shoegaze guitars, Bizou craft a sound entirely their own. Formed in 2017, Bizou have shared stages with Drab Majesty, Ötzi, Hunny, and many others — spinning their gossamer web of dark and bright sonic waves around goth and pop fans alike.

Following the release of their eponymous 2018 EP, Bizou joined SF cold wavers Topographies on a Southwestern tour culminating in a showcase at Elysium / SXSW. Upon return the band retreated to guitarist/producer Josiah Mazzaschi’s beloved Cave Studio to write and record their second EP, Stillifeburning — both a tonal departure from the first and a decidedly saturnine downshift in mood.

The title track “Crashing Sky” opens like a startled eye at midnight, surrounded by swirls of vertiginous guitars and spiraling synth arpeggios. The vocals emerge or rather unravel from within — a confessional lifeline within the chaos.  Personal asides dot the lyrical landscape, of Stillifeburning, The EP’s title reflecting a captured state of immolating introspection, sometimes bordering on disintegration. “If you could dive into into the subconscious of another person totally separate from you, as if through a trapdoor — that to me would describe the feeling of these songs,” says singer Marisa Prietto.

Texturally the EP gathers influence from an amalgam of post-punk mainstays like JAMC, The Cure, and Slowdive; but carves away from similitude with arresting hooks and unexpected melodies that  breathe fresh urgency into well-established forms.