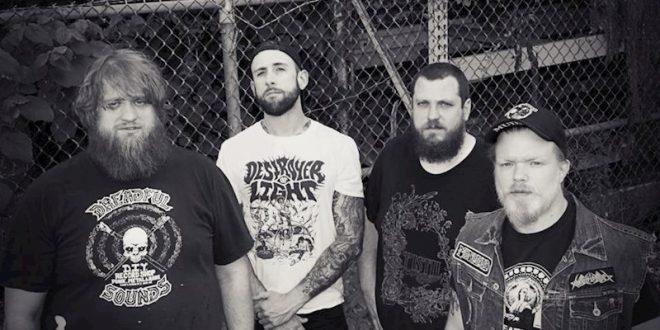 Appearances can be deceiving – Weed Demon from Columbus, Ohio, will be the first to tell you that. While it would be a lie to say that Mary Jane had no influence on their music whatsoever, the quartet already showed in 2017 that they offer more than that. Astrological Passages was a notable evolution from their début EP, and second album Crater Maker walks even further down that path.

By and large, there are still swathes of the sludge/doom metal sound on which Weed Demon made their name. “Birthquake”, for instance, starts out in familiar Sabbathian territory, and later takes notes from Earthless in the off-the-wall soloing. Speaking of names, it’s clear that the band have retained their tongue-in-cheek sense of humor with their song titles, such as the rhyming “Serpent Merchant”, “Crater Maker”, and “Sporelord”. There’s also a continuation of the cosmic theme established on Astrological Passages, as tracks like “Serpent Merchant” drop into psychedelic space rock that would make Hawkwind proud.

But those familiar moments are frequently contrasted with unchartered territory. Opening track “Atmospheric Drag”, for instance, has more in common with dark country and Western, with its harmonica and strumming acoustic chords. It’s also intriguing to note the vocals of bassist Jordan Holland, whose guttural growls surprisingly work both here and in brutal death metal outfit Domestic Terror.  Perhaps the most jarring moment, though, is the blackened death metal onslaught that emerges during the title track, powered by drummer “Big Nick” Carter and truly representative of the monster adorning the cover art.

There’s plenty more besides to dive into on the record; Weed Demon have done an excellent job of distilling a host of ideas into one lumbering entity. While they may forever wander down the road searching for the tone eternal, Crater Maker is a mighty fine pit stop along the way.

NewYork Based Photographer. Music Enthusiast with a background in Graphic Design. Whether I'm shooting a live event or just out wondering the streets its about capturing the moment.
Previous Lucifer Star Machine Release “The Devil’s Breath” Today
Next Wyldlife Drop The Jesus and Mary Chain-Inspired New Single “Automatic”