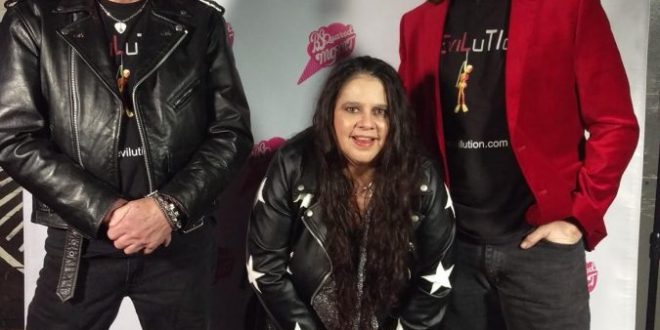 We are excited to have REVILUTION with us today! Let’s start with the band name – tell us how you landed on it?

Scott Flint, guitar, vocals: The band was already named when I joined.

Marie B, vocals: Dan had the idea for the band name when I met him. Why it is rEVILution is because there is a dark side to the human mind and if you can be aware of it you can impact how you are. Light and dark. Balance, you can’t have the good without the bad. Maybe Dan can say that more clearly.

Dan Seitz, vocals, guitar: I have ADD, and sometimes when I zone off I mess around with words, the spellings and meanings and such. I came up with the word “REVILUTION” during one of those fugues, and the concept intrigued me. I believe that everyone has a “good” side and an “evil” side, and most people try to keep their darkness under wraps so that they can get along in civilized society. But in my opinion, that darkness carries the courage we need to speak up, to right wrongs, to make changes happen in our lives and society. When drastic changes must be made, we need to have a REVILUTION.

You have been teasing new music – we are excited about it! What inside details can you give us?

Scott: The new single came out on the 18th of March. The new material will surprise everyone.

Marie: The latest song we released on 03/18/2020 is “More Than Air” which is a funk and roll song. Very REVILUTION and showing how rock and metal music are blues based in sound. Scott brought it to the studio and Dan and I added our sounds to it to make the whole thing all together.

Dan: We have another single waiting in the wings that was recorded at the same time as “More Than Air.” It was also penned by Scott, and it’s actually been in our set list for a while. We haven’t decided on a release date for it yet, as we’re still promoting “More Than Air.”

What have some of your biggest inspirations for the new music you are releasing?

Scott: For me the inspirations have been getting through the daily struggles of life, and writing about it.

Marie: The same inspirations plus the evolution of music sounds in general are the inspirations for the new music. Great question!

Dan: My biggest inspiration is Scott. He’s been diligently working up a lot of new tunes, and I have a lot of fun learning how to play them since his style is quite a bit different from mine.

How long do you work on material before you release it? Do you ever truly feel like you are finished with a song?

Scott: The song writing varies, sometimes we’ll finish a song in an hour, other songs will take a month or more to complete. And there are songs that are complete but still need to be finished, meaning there’s still room in the song for musical and vocal input.

Marie: Well, with the current lineup of Dan, Scott, and myself, a song can take a month to come to the studio and then another month to create. It just depends. Five months ago Brandon was here on the drum kit to add his parts. Since Dan, Scott, and I have been holding the band together ourselves without a bass player and a drummer it has maybe slowed it down a bit. Auditioning new possible band mates takes energy we could be using to create music and to play live shows. It’s hard to say. It’s all a part of what we are doing so I hope that’s not too far off track from your question. Brandon was here in the beginning of creating the song we are about to release but has been unavailable due to brain trauma from an illness he got.

Dan: We’ve learned that using professional engineers and studios to record music results in a much better-sounding product, so the process from writing to releasing takes longer than it used to. None of us are rolling in money, so we have to save up until we have enough to pay for studio time. And it’s smarter financially to have all the parts worked out before you start laying down tracks, which also helps us feel like the songs are finished once they’re recorded.

Who would you say have been biggest supporters in your career so far?

Scott: Our biggest supporters have been our fans, our friends and families, and each other.

Marie: My parents, family, extended family and friends. I gained a lot of support when I bought my Jeep. It may seem unrelated but when I bought the Jeep my whole life changed. I got friends who own and drive Jeeps that support and watch my career. They ask questions and show interest as well as encouraging me to create new music and music videos. Jeep people like to see Jeeps. Two of our music videos feature the Jeep and one features me doing the stunt Jeep driving all through the video. I’m keeping it short for the answer but this is four years of events and outcomes in one answer. Also, ever since Scott joined the band he and his wife, their family and friends have all been major supporters of the band. There’s five years of history before that though. The band was already established when he joined and then he added his expertise when he joined. So…there’s a lot of important things there.

Dan: Scott’s wife, my parents, our manager Birdee Bow and her team, and, funnily enough, my bosses at the various day jobs I’ve held since this all started! (laughing) 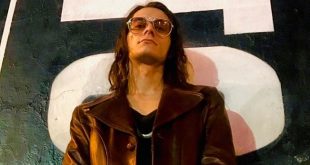 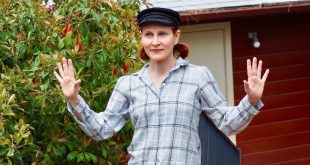 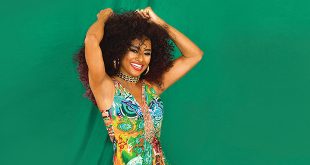