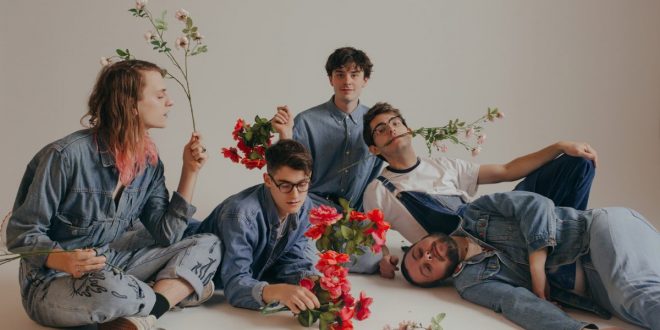 In 2016, Early Eyes came to life on a Minneapolis college campus. Though the band originally started as a hobby, they have since become so much more. Early Eyes have established themselves in the Twin Cities with their catchy, energetic, and soulful sound, which has led to local venue First Avenue naming them one of the Best New Bands of 2017 and Minneapolis City Pages nominating them for Best New Band in 2018. They have released three EPs: Minutes (2017), Decorating (2018), and All Shades of Teal (2018).

Their newest single, “Marigolds” is out now.

We recently sent over some questions to the band to help us get to know them better, vocalist Jake Berglove answered our questions, learn more about Early Eyes now:

The classic band conundrum! After many extensive conversations we decided on “jazz pop!”

How did Early Eyes first come together? Is the band still all original members?

We all were headed to the same university and in the class group chat, Wyatt asked who wanted to start a band at college and I responded with a big ol’ “Yes.” I met des randomly on campus and asked him to hang out! That night he rolled into my room with his bass and the rest is history! Later, Des met John in class (no shit, asking for a pencil) and Joe and I had vaguely known each other in high school, so we pieced together a sweet quintet and have been giving it the college[dropout] try ever since!

We actually started out with another member, Henry James Patterson. After our first few months as a band we decided to go our separate ways, so he could focus more on his own art and his degree!

What does it take for a band to stand out in Minneapolis’ music scene?

Minneapolis is an extremely supportive and fruitful community! I’d say the biggest struggle most bands have trying to stand out probably comes from how active the music scene is! Most nights there are like 3-4 rad shows with solid lineups, so from a listener perspective, it’s kind of hard to decide which show to spend your evening at!

What are you doing during this time of social distancing?

We’re all lucky to live together, so on the bright side, we’ve been having a ton of time to write, rehearse, demo, and chat etc… We’re working on a ton of new music and videos to share during Quar’, and hoping we’re doing a good enough job flattening the curve to be back out on the road, soon!

We all share songwriting duties to some degree! Every song has a little bit of a different process behind it, so it’s difficult to say what the exact methodology is! For the most part, I write the brunt of the lyrics and melody. We all usually arrange and revise the song in the practice room before we try our hand at the demoing and production process!

What should people expect from the band in 2020?

Full disclosure: we’re not exactly sure with the global pandemic and all! We have a ton of songs in the vault to be released and have a lot of ideas baking in the oven in regards to other EE content! Hopefully we can be back on the road ASAP as long as it is safe!

I am proud to say the first CD I bought was Britney Spears’ “Oops! I Did it Again.”

I am equally proud to say the first concert I went to was N*SYNC. My mom loves to tell people that I was so young I couldn’t see over the seat in front of me lol. The first concert I attended unchaperoned, however, was Two Door Cinema Club during their Beacon tour. One for the books for sure!

Most influential artist to you personally?

We all take inspiration from a lot of different artists/genres, so it’s hard to pinpoint one single artist, so I’ll give you a few 😉 Hayley Williams has always been my inspiration in terms of energy, performance, and general aura! As a songwriter, I gotta stand by Carole King! As a keyboardist, I’ll always look up to Ryo Fukui, and Woody Goss! As a singer; lately, Dionne Warwick has been blowing me away! Not only is she an incredible vocalist, but she just draws out all the emotions of the lyrics/melody like nobody I’ve ever seen! Her record singing the Bacharach/David songbook is chef kiss delectable! At the end of the day, I really do think the most influential musicians in my life are my band mates! They’re all a wealth of musical knowledge, and we really Lear a lot from each other!