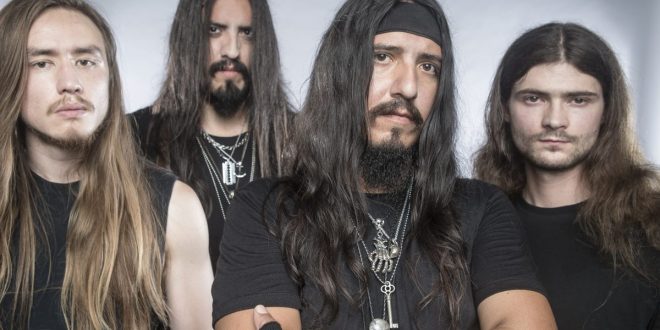 Interview with Art Of Shock

Editor’s note: Although we were unable to catch Art Of Shock at their show in Los Angeles earlier this month due to their tour with Sepultura being cancelled from the coronavirus, we were able to interview Art Geezer. Be sure to check out their new album ‘Dark Angeles” that came out March 20th.

Your newest song “Peace on Earth” is out. What’s the story behind the song and what inspired you to write it?

“Peace on Earth” is a pessimistic take on the outlook of humanity, “when there’s nothing left to kill, peace will reign on earth”. It’s about the feeling that peace can only be achieved by the full extinction of the human race, should we continue on our natural warmongering path.

“Peace on Earth” is a part of your new album Dark Angeles. Can you tell me more about the writing process and what’s the theme of this album?

The album itself wasn’t created with a specific theme in mind. I can see how some people can piece it together in different ways and that’s part of the magic of music. When it comes to the writing process of the album, we took it one song at a time. We were very mindful of atmospheres and textures, we were thinking more of what the song needs instead of trying to force every song into a certain genre.

You were supposed to go on tour with Sepultura, but it’s postponed due to coronavirus. Tell me how do you cope with the current situation and what do you do in your spare time now that you’re not touring?

It’s obviously a terrible feeling to have a new album, that we worked so hard on and not being able to go present it to other people, but we’re doing the best that we can with the hand we’re dealt. We’re trying to look at the positive side and use this moment to be creative and generate new ideas. We’re definitely not just sitting on our asses.

What’s your favorite part of being on tour?

Favorite metal bands at the moment and who would you like to collaborate with?

That’s a hard one! We all have very eclectic playlist, but just looking at mine right now I’ve got Dismember, Deicide, Morbid Angel, Pantera when it comes to metal, We listen to all kinds of music in our camp! I think, when it comes to a collaborative effort we would all love to have Jeff Loomis play a solo on one of our songs!

What do you consider the biggest achievement in your career so far?

Seriously, just being able to do what we want to do!

Do you already have any plans for your future music and what direction would you like to take on your next record?

We’ll go wherever the music takes us. Don’t expect the same record twice!

Do you think that metal will be more or less relevant in the future?

Metal will still be relevant for many years to come, we might see a lot of changes, it might become even more of a niche genre like Jazz and the Blues but we’ll continue to thrive as a community

And for the end – can you share a positive message for your fans during this difficult time in the world?