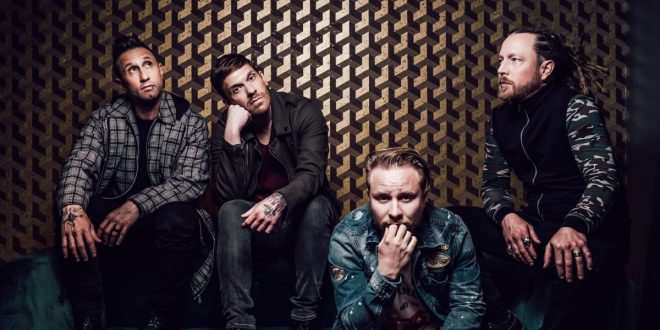 To help with the essential personal protective equipment needs facing the health workers responding to the coronavirus, multi-platinum rock band Shinedown has partnered with non-profit humanitarian aid organization Direct Relief. The band is offering some optimism and faith in humanity by reaching into their vault to make available a never-before-heard, brand new song “Atlas Falls.” The song will benefit Direct Relief, who are currently working to provide personal protective equipment and essential medical items, including protective masks, exam gloves, and isolation gowns, to the U.S. and international health workers. The song is available now for download with the purchase of a unique T-shirt. 100% of proceeds will go to Direct Relief, one of the largest providers of humanitarian medical resources in the world operating in the U.S. and more than 100 countries around the world. The band is kicking this off with a $20,000 donation of their own to Direct Relief. The organization is working in overdrive to get protective gear into the hands of as many health workers as possible as quickly as possible, with emergency deliveries leaving daily for medical facilities across the U.S. Drawing inspiration from the Greek myth of Titan Atlas who carries a celestial sphere on his shoulders, the song is a reassuring anthem that if Atlas falls, we will hold each other up in times of strife. For more information on Direct Relief’s COVID-19 response efforts, please click HERE.

Shinedown’s Brent Smith offered his thoughts on the situation, saying: “I have always said and believe to be true that music can heal us all. We need music, and each other, now more than ever as we all are witnessing a global pandemic, unlike anything we have ever seen in many generations. Myself, Barry, Zach, Eric, and our Shinedown family want the entire world to know that we are in this together, and we must all do our part and continue to encourage love, respect, and taking care of each other. Now is the time to put our differences aside so that we can truly lift each other. We have partnered with an incredible organization, Direct Relief, who are doing important work globally to help the medical community receive the resources they need to save lives. Years ago, during the writing and recording of the Amaryllis album, there was a song that meant a great deal to me and the band titled “Atlas Falls.” Although the song did not make the album, I always felt that one day the world would hear it…It has never been more clear to me than right now that the time has come for ‘Atlas Falls’ to arrive.”

Due to CDC guidelines and in compliance with local, state, and federal government mandates regarding COVID-19, Shinedown’s Deep Dive Tour originally planned for April and May has been rescheduled for August and September. All tickets will be honored for these shows. The intimate Deep Dive Tour will see Shinedowndiving into their extensive catalog to perform an array of deep cuts and B-sides, some of which have never been played live before, along with their biggest hits.

NewYork Based Photographer. Music Enthusiast with a background in Graphic Design. Whether I'm shooting a live event or just out wondering the streets its about capturing the moment.
Previous Lamb Of God to Premiere Full Set From 2019 Performance at Resurrection Festival in Spain Tomorrow at 3pm EDT
Next Trivium Share Video For Title Track To “What The Dead Men Say”