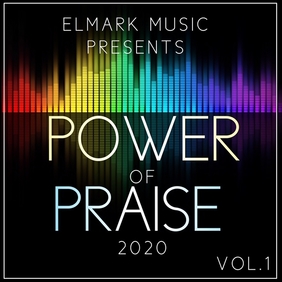 Earlier this month, Elmark Music released the 2020 edition of Power of Praise Volume 1. Following the album’s debut, it rose to a modest #79 on the DRT Global Top 150 Independent Airplay chart, while fairing more respectably at #14 on the top 50 Gospel/Inspirational Airplay chart. Throughout, this compilation showcases a wealth of unsigned music talent, with songs influenced by everything from pop, to hip hop, to world music, and an emphasis on the Word of Christ.

On the album’s first side, there’s a clear balance of modern and throwback implementation of styles that provide it a decent pace. The opener, Cameo Profit’s “Stick to Your Day,” focuses primarily on a disco-laden groove that strives to get listeners up and dancing. Just as well, the female backing harmonies emit complementary energy to the presentation, while the thematic standpoint centers around being able to start on a clean slate. From there, the second track, J. Love’s “Show Me the Way” represents an aptly-emphasized cloud rap foundation. Admittedly, the intro may lead listeners to expect a typical, perhaps somewhat out of place song of that style, but the spacious, future-esque involvement around the track quickly works to the singer’s benefit, bolstering his passion rather than obscuring it. As the album’s first side progresses, it follows a solid thematic notion of the efficacy of faith in conjunction with a strong work ethic. The next group of songs, kicked off by La’Keisa Rambo-Barrett’s reggae-influenced “For Me” and the collaborative “Alive” (Kajmir Kwest, Nulyric, Roye Moye III and Cash Hollister), maintain the pace it with more throwbacks based around late 80s and early 90s R&B. Capping the first side is the modern-influenced “Apple of My Eye” by The Message, a highlight track of the album that balances biblical history with a means of recognizing one’s authentic identity. Rather than preach a one-way perspective, it holds merit in its message of everyone being equal in God’s eyes, which I can appreciate.

The latter half of the album continues on a strong thematic note with Oatmeal Brown’s “God Is the Plug” and J Prince’s “Seed of Abraham,” each centering on keeping a consistent basis of faith in one’s journey through life. In a complementary instance, “Church” by Dunamis L1019 maintains the angle with an anecdote involving asking God for redemption from having gone down the wrong path. Toward the end, I found the pace of the album to be further utilized by “No Apologies” (Gem’N.I., Sean Carson) and “Time” (David), both of which essentially serve as the penultimate and final tracks. Whereas the first track reveals a firm, unabashed love of God, the remaining track brings the album to a humble close, emphasizing the importance of living the most fulfilling life with the time we have on earth. Although not explicitly stated, this is especially resonant with our current standing amidst a worldwide pandemic. However, even after the disaster subsides, we must still recognize the importance of opportunity, kindness, compassion and humility in society, and not take our circumstances for granted.

Overall, I was pleasantly surprised by both the presentation and implementation involved in Power of Praise Volume 1. While the thematic content may resemble what listeners typically find in worship music, this album strives to take a refreshingly fun, hook-laden approach, which is in contrast to a majority of slower-paced and stylistically similar modern releases in the same genre. I have since warmed up to modern worship music, and look forward to more emerging talent on the eventual sequel.

I come from a family who is passionate about all things music. I learned to sing at an early age, and by 13, had my very own Fender Strat guitar. I tried my hardest at learning all that I could. Because I was born with cerebral palsy, I had to teach myself an adaptive playing style. I learned to write and record my own music, despite these difficulties. In college, I started making great use of my writing abilities by reviewing music, as well as copy editing. I guess it's best to stick with what you know, while welcoming a fair challenge at the same time.
Previous Album Review: Caroline Blind “The Spell Between”
Next Corona Sessions: Chart-topping Musician Raises Funds For Local Businesses “By Request”