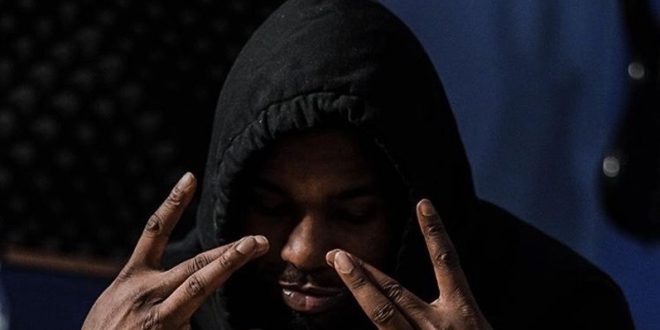 GMB GunnaMan is an up-and-coming hip hop artist from Cleveland, Ohio. In his formative period, he attended Shaker Heights High School, the same school as future stars Machine Gun Kelly and Kid Cudi. In fact, it was Cudi who had influenced him the most – everything from his ad-libs to his melodies. Currently located in Charlotte, North Carolina, GunnaMan has impacted listeners with personable storytelling through two mixtapes: the 13-track Going Up, and its eight-track successor, Still Going Up.

GunnaMan’s latest release is 222, which signifies its time of release – 2:22 PM EST. It is a more condensed yet succinct effort that maintains his signature ethos. The EP’s opener, “Gamble,” features a refreshing acoustic guitar arrangement with reverberating vocal accentuations. As the song progressed, I began to understand how its thematic direction centered on one’s newfound freedom, but from two different contexts. One involves the simple ability to go anywhere, while the other involves the consequence in recklessly taking that freedom for granted. In the second track, “Alicia Franklin,” it seems that an angle from the previous song, having to do with recognizing the extent of one’s own actions, is applied to the difficulty of placing full trust in someone, knowing the outcome may be for the worse. The acoustic guitar quality that defined these tracks shifts to piano, and alongside that, extends the upon the notion of recklessness – coming up with a plan to approach life as it currently stands, but somehow getting knocked down and lost within the grind. As the stylistic tone shifting to a jazzy, laid back guitar for the first side’s capping song, “Dirt,” there seems to be a slightly more uplifting, albeit brief, diversion to offset the EP’s grim tone thus far. In a sense, the song highlights a deeper awareness of self-respect, while, at the same time, openly admitting to having an elevated ego at times when success is experienced.

With that angle in mind, the latter half of the EP continues on a grim note, starting on the fifth track, “Which Piece.” Alongside making mention of how various sudden roadblocks hinder the path toward growth, GunnaMan also does his part of calling out those who leach off not only him, but the system. From the song’s general pacing, he also aptly expresses the façade of success concocted by his peers, as well as the fickle nature of humanity. “Audible,” then refreshes the pace and could be characterized as both a song and an interlude. In it, GunnaMan emphasizes his ongoing drive in the hustle life, while noting (possibly humorously) that producing an audiobook would be deemed ‘the safer route.’ Once again, though, the instrumentation is more upbeat, and it’s cool to have that brief changeup to keep things moving. The penultimate song, “Inner G,” further puts these sentiments in perspective. By the acoustic guitar making a welcome return, I also started to notice the returning angle of trusting one’s gut feeling, and being diligent around those who might have ulterior motives. On “Unforgettable Interruptions,” there seems to be a shift toward a more positive tone, much like the end of the EP’s first side. This time, there’s a bigger, dreamier sonic involvement, GunnaMan’s melodic vocals complementing the depth of the instrumentation. It also wraps the EP’s thematic standpoint, as it centers on embracing someone wholeheartedly despite conflict, and allowing them a safe space to be heard.

Overall, 222 feels like a solid extension of GMB GunnaMan’s first two efforts. Even with its short length, there is plenty of merit, and a continuation of his consistently, personable anecdotes. I notice definite growth in his ability to deliver both substantially and concisely in EP form, and another full-length would suffice just as well.

I come from a family who is passionate about all things music. I learned to sing at an early age, and by 13, had my very own Fender Strat guitar. I tried my hardest at learning all that I could. Because I was born with cerebral palsy, I had to teach myself an adaptive playing style. I learned to write and record my own music, despite these difficulties. In college, I started making great use of my writing abilities by reviewing music, as well as copy editing. I guess it's best to stick with what you know, while welcoming a fair challenge at the same time.
Previous Paradise Lost Announce New Album “Obsidian”
Next Mike Patton Teams With Zeus! For Cramps Cover Of “Human Fly”