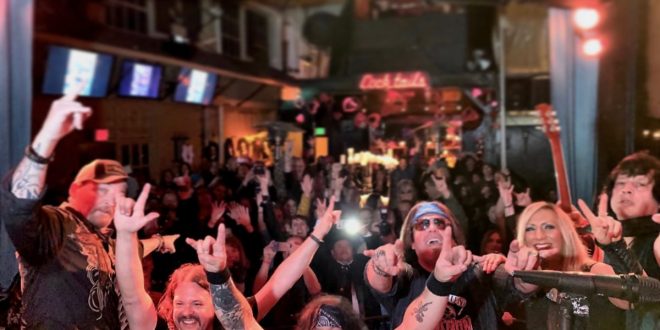 The live performance by Six Gun Sal (SGS), Southern Rock Band for the released of their new music video “THE LIFE” and their new song “Take Me Home” which was release on February 18th by Sony-The Orchard. The band absolutely rocked Hollywood to a full house of 200 guests.

The music video “The Life” was produced by Anthony Appello of Six Gun Sal.  The executive producer of the event was Michelle Mayer. “THE LIFE” Video: https://youtu.be/kUlqBd54erg

The evening set the tone with a celebrity red carpet at Boardner’s by La Belle in Hollywood hosted by Australian actor Vernon Wells. Band Members of Six Gun Sal include Anthony Appello (Co-Founder of SGS and Lead Vocal), Dusty Lang (Co-Founder and Rhythm Guitar), Joey “Jo Jo” Durant (Drummer), Matt G (Bassist), Ed Fierro (Lead Guitar) and Mia Dunn (Backing Vocals) and the band is managed by Samantha Kamholz, Zebra Management.  It was announced that the band was gifted a tour bus by their management team as they plan to tour in the summer.

Six Gun Sal will move you with melodic emotional ballads, heartfelt lyrics that are relatable, and grungy rocked out powerhouse songs like Whiskey Mountain and The Life. Featuring powerful lead guitars and funky bass riffs, and drum fills that will make you get up and move to the sounds of Six Gun Sal.

Six Gun Sal has shared the stage with bands such as LA Guns, Lynchmob, P.O.D. TRAPT, Junkyard, Great White and many more.

Stephen Vicino is the founder of MusicExistence.com. He created this site to give talented musicians a voice and a way to be discovered.
@@svicino
Previous Åskväder Release Self-Titled Debut Album Via The Sign Records
Next Sky Titan Media Follows International Success With New Single Release From Strings Of Atlas