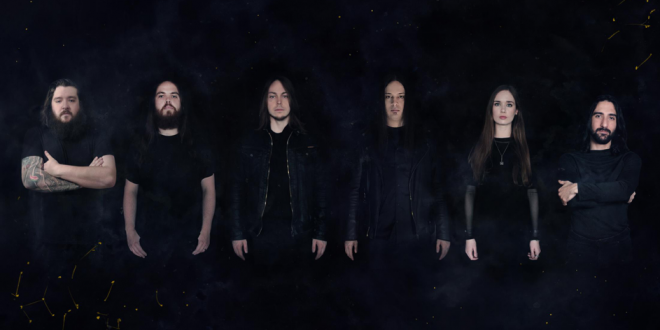 2
SHARES
FacebookTwitter
An inflammation of harsh soundscapes exploding in a striking symbiosis of deep growls and clean female vocals: SOJOURNER’s new album, Premonitions, to be released on May 8 via Napalm Records, rises like an upcoming vortex that leaves the violent, yet undeniably beautiful stylistic evolution of their sound in an exceptional fusion of folk and atmospheric black metal.
Along with a visually stunning music video, their first single, “The Deluge”, draws its recipient into the wildness of Scottish nature and its famous Highlands. Accompanied by the unforgiving moody atmosphere, SOJOURNER takes your senses into a world of desperation, pain and the light shimmer of hope, that not all of our stories are inked at all.
“The Deluge” offers a first glance at the upcoming release spanning a wide range of musical forms and unfolding into a musically unpredictable ode to the unknown. Premonitions is in this sense not only a masterfully told story, but much more a milestone confirming the group’s unique approach towards the genre!
Watch the official video for “The Deluge” below:

Emilio Crespo states:
“”The Deluge” represents the personal journeys that the members of SOJOURNER have endured for the past year. A deluge/flood is a devastating event that leaves a trail of destruction in its wake and this is encapsulated in the melancholic lyrics, hard rhythm and blistering leads of the track. We felt that “The Deluge” sets a darker tone and pace for the new album and therefore it was our first choice for the leading single of the new album, Premonitions.
Due to the fact we are an international band spanning the globe, we decided to emphasize this in our first video by not pursuing one particular style, but telling the story of all the members coming together from their separate paths while mixing in stylized band shots which were all expertly shot and edited by the talented Oliver König.”
Mike Lamb adds:
“Scotland has some of the most breathtaking landscapes and is a place we all hold close to our hearts for various reasons. That paired with the fact it was the right fit for “The Deluge” and SOJOURNER thematically, it was an easy decision to have the Scottish Highlands as the setting of the video.”
Their un-inimitable tonal trademark breathes the bands internationality: Living in four different countries, they combine each mindset and evoke the sweeping, melancholic atmospheres of nature merging with aggressive black metal fundamentals. SOJOURNER forms an indestructible bond that mirrors through their music. This album is not only a masterfully told story, but much more a milestone confirming the group’s unique approach towards the genre!
Pre-Order New Album Premonitions NOW!

NewYork Based Photographer. Music Enthusiast with a background in Graphic Design. Whether I'm shooting a live event or just out wondering the streets its about capturing the moment.
Previous Fearless Records Signs My Kid Brother / New Song “Pastels”
Next Alcest Present Remixed Version of Single “SAPPHIRE” by Pertubator