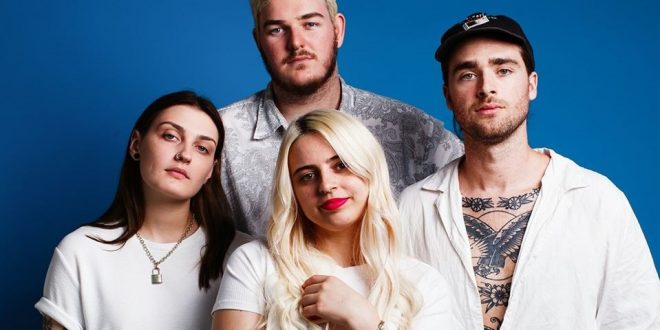 Interview: Eliza & the Delusionals talk touring, favorite US venues, and writing for their new EP

Editor’s note: For young burgeoning bands making a splash in one country is hard enough, so when Australian alt-rock outfit Eliza & the Delusionals’ single “Just Exist” landed a #1 spot on Alt Nation before the band even had a Wikipedia page, there was reason to celebrate. Led by frontwoman Eliza Klatt, the group’s growing momentum got going around the release of their 2017 EP The Deeper End In.

Three years later Eliza & the Delusionals find themselves getting ready to drop their next EP, A State of Living in an Objective Reality, on March 20th. They’re also just coming off a run as direct support on a major US Tour with alt-rock legends Silversun Pickups and will support British indie-pop songstress beabadoobee on tour later this month.

We got the chance to chat with Eliza about a range of topics including the hit single “Just Exist,” and  the writing of the band’s upcoming EP, read through Ashton Carr’s interview with Eliza Klatt now:

You’ve said that between the time when you wrote the songs on your upcoming EP, ‘Living in an Objective Reality’, and the time that you started tracking them, you were in a completely different headspace. How did that affect the musical outcome of each of the songs?

I wrote those songs probably 12 months before we took them into the studio. I was freshly out of that headspace – as I had just broken off my relationship at the time. The band also went through some massive changes internally, so I think going to the studio was a perfect release for everything that we had gone through over the past months leading up to it. I think being immersed in the studio and back into playing those songs over and over again it’s hard not to put yourself in the headspace of what the song is about.

Your single, “Just Exist,” has found massive success on Triple J back home as well as Alt Nation here in the States. Has this surprised you at all?

Yes, definitely. Everything still continues to be a nice surprise for us. We are so grateful for the support from Alt Nation, because it’s truly changed our career. We’re excited for the future here in the US!

Being in the middle of an extended touring stay in the US, do you feel as though the environment here has changed your approach to writing or functioning as a band as opposed to touring around Australia?

Absolutely. I think if you’re constantly touring Australia it’s very easy to get caught up in a “this is the only thing that matters” mindset. But being over here and experiencing support touring and headline shows, the world is much bigger and there are so many more opportunities than just what is happening at home. It’s been super inspiring to be thrown into the deep end of touring I guess, and I’m excited about the creativity that’s coming out of our experiences here.

Is there a stark contrast between your last EP ‘The Deeper End’ and your forthcoming EP in process or finished product, or do you feel as though it is a natural progression? How so?

Yes, I think so. The Deeper End EP was written years ago, and I feel like if you don’t look back at your own work and think you’ve progressed from it then something isn’t right. I don’t connect with that music anymore. That doesn’t mean I don’t love the songs, they’re some of my favourites to play live. But I don’t feel the same way I did when I was 18 trying my hand at songwriting, which I think is a good and progressive thing.

In between a long list of tour dates, you have quite a few festivals lined up. Do you have a preference for festival shows vs. venue shows? Have you noticed a difference between the crowds here and in Australia?

It really depends. I love the energy at festivals. There’s something special about watching your favourite band while the sun sets outdoors. But in saying that, some of the venues we’ve been lucky enough to play with Silversun Pickups have been some of our favourite shows of all time – we especially loved The Wiltern in LA, Oakland’s Fox Theatre and Cains Ballroom in Tulsa. I think the big difference in the crowds is that we had a lot of people turn up early for our sets with Silversun Pickups, which was amazing. I think we have a larger growing fanbase over here compared to home thanks to radio support, so we had a lot of people singing along to our songs as well at those shows.

What are you most excited for following the release of Living in an Objective Reality?

I’m excited for these songs to be out. I feel like we’ve had them in our set and under our wings for so long it’s nice to see them finally on something as a collective and released out into the world. We are super proud of this release, and I just hope that everyone loves it as much as we do.